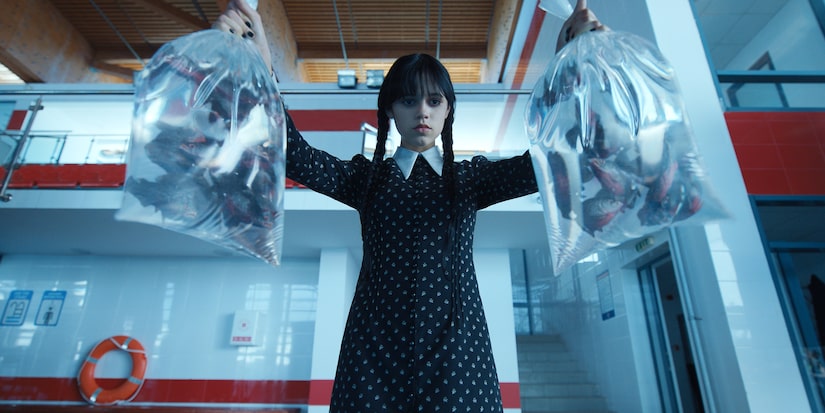 Jenna Ortega is dishing on her new series, “Wednesday.”

“Extra’s” Katie Krause spoke with Jenna about her Wednesday Addams transformation, as well as what to expect from the upcoming “Scream 6.”

Ortega revealed that famed director Tim Burton chose her for the role, so she didn’t even have to audition.

She recalled, “I got an email saying that Tim wanted to speak to me. I just heard about the job… You almost feel like you’re being pranked or something because there’s no way that someone so legendary, so such a visionary… I truly felt very, very lucky.”

As for her transformation into Wednesday, Jenna admitted it was “weird” to see herself in character at first. She added, “She looked very different from me physically… It was very new… It’s kind of jarring to see something like that.”

Eventually, it only took Jenna “less than an hour” in hair and makeup to become Wednesday.

Her favorite parts of the transformation were the braids, bangs, and the wardrobe! She stressed, “It was just nice that it was my own version, and I think it gave me more liberty to kind of play or try new things because she was unlike a Wednesday that I had seen before.”

When asked how she put her own spin on this Wednesday, Jenna shared, “I think almost going back to basics… I think for me… we’re introducing her to another generation. It was like a little bit of just kind of paying homage to what had been done previously, but then also introducing the audience to something new.”

Jenna also praised Christina Ricci’s portrayal of the character in the ’90s, saying, “That also was the first time the character had ever been seen like that before, which just goes to show how talented [Christina] is and like her impact.”

Ricci is in this series, giving Ortega a chance to bond with her! They didn’t talk about Wednesday, though. She said, “We just got to know each other. She told me about her family, where she’s from, and I did the same.”

Jenna also raved about Catherine Zeta-Jones, who plays her mom. She gushed, “She’s so sweet and so funny. I feel like her humor isn’t appreciated enough.”

On the show, there is some romance for Wednesday, but Ortega didn’t want her character to be in the “middle of a love triangle.” She explained, “I think it’s kind of entertaining for her in that sense but I don’t think that it it’s something that she obsesses over — she’s not boy crazy in any sense.”

For her role, Jenna performed many of her own stunts. She said, “I did do a lot of my own stunts, but there’s also a lot. I learned all of the sword fight and the fencing and there was really important physical aspects like that, like the fencing that I knew that I wanted to do myself and have ownership of.”

Jenna also gave an update on her highly anticipated film “Scream 6,” which she is already done shooting. She teased about Ghostface: “He’s just… I don’t think we’ve ever seen him so violent, so I think that it’ll be good for people who like gore or just real assh*les.”