“DWTS” couple Sharna Burgess and Brian Austin Green were back in the ballroom last night, cheering on the current couples.

Sharna gushed about their son, saying, “He is this really cool interesting human already. You get to see so much of his personality. He’s another Cancer — we’re both Cancers… He has all the emotions, all the feels, lots of opinions, but he doesn’t cry. He is a really happy baby, but he’ll, like…”

Making a baby noise, she commented, “He’ll tell you when he doesn’t want something. He is so good.”

Brian added, “I love that you did an impression of him on “Extra.”

As for watching Sharna become a mother, Brian commented, “She is so good… I watched her become a mother with my kids, so then this time having her own is magical, it’s really cool.”

They are, however, getting ready to celebrate the holidays with their extended family. Brian dished, “We are moving pretty soon, so we are really looking forward to having a big dining room table and getting the family things going.”

Sharna pointed out, “It’s that beautiful moment when you have a big, long table and all your family is around it… Now my mom is here and we get to do it with the kids.”

The couple had “so much fun” on their night out in the ballroom, but Sharna said she misses Zane “every time” she leaves him

Brian noted about the dance theme, “Such a great decade, ‘90s. Not that I am partial, but that was kind of my decade.”

Sharna admitted she can’t pick just one couple to root for, saying, “I love Charli and Mark… I am also a huge fan of Gabby and Val… I love Wayne and Witney.”

Will Sharna return to the ballroom next season? She answered, “If they want me, I will be back, for sure.” 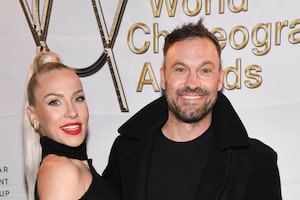 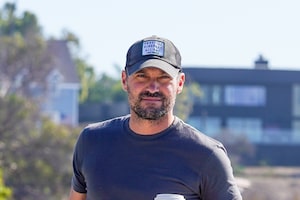