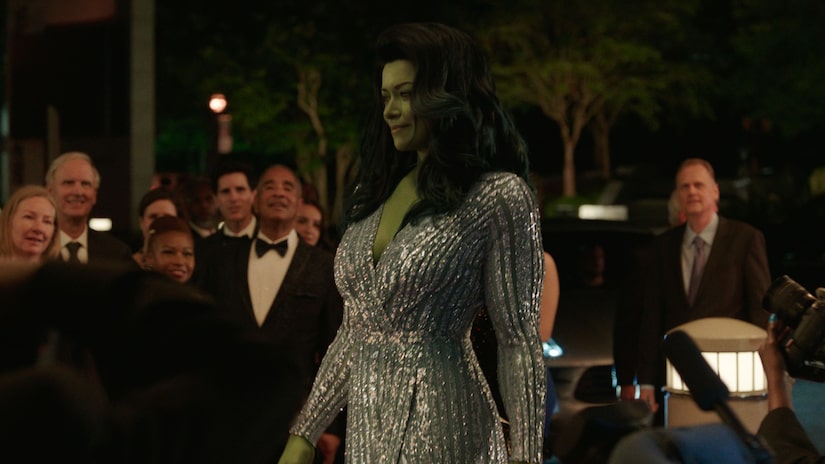 Tatiana Maslany is dishing on the season finale of “She-Hulk: Attorney at Law,” which ended with many cliffhangers!

As for her reaction to finding out how Season 1 ended, Tatiana told "Extra's" Katie Krause, “When I read the episode, I was just so excited. It felt like so in the spirit of ‘She-Hulk,’ which is just irreverent.”

Are we getting a Season 2?

In the episode, Tatiana’s character Jennifer Walters smashes the fourth wall with K.E.V.I.N.

She said, “K.E.V.I.N. in the scene seemed to be very dismissive of this idea, so if we’re basing this off of the real Kevin [Feige], then it doesn’t seem likely.”

While she doesn’t know anything, Tatiana would be down to play Jennifer again! She noted, “I love this character.”

As for the possibility of a ‘World War Hulk’ film after one of the characters said, “Save it for the movie,” Maslany commented, “I mean, we show that Hulk has a child. We reveal his child and so I want to know about that child.”

Hulk’s son Skaar was introduced in the finale. Tatiana said, “That scene to me was just we were basically doing, like, an indie movie about a family over in this corner and then we would, like, look over and Mark [Ruffalo] would walk in with these huge green arms in a big Hulk chest and like a little camera on his head.”

Tatiana also shared her take on the relationship between Matt, aka Daredevil, and Jen, saying that their relationship isn’t serious “at all.” She added, “I think Jen is half, like, trolling Matt… I think also there’s something about the way Matt is with her, where it seems like he’s just cool with who she is.”

While Maslany could see Matt and Jen “go all kinds of ways,” she felt that Jen doesn’t need to settle down just yet. She elaborated, “Jen’s life is just starting to, like, open up, so I feel like I don’t what her next thing is, but I feel like she has just started to come to this kind of wholeness in herself and getting to know herself and getting to trust and love herself.”

Since Charlie Cox, who played Matt, appeared on “She-Hulk,” could we see Tatiana do the same on “Daredevil”? She answered, “I needed an invite to return that favor. I need a contract. I would love to.”

As for what she wants for Jen in the future, Maslany said, “The thing that drew me to playing this character was just how unexpected she was… To me, as long as it’s surprising and as long as it’s king of flipping them on their head, doing that with things that we’re expecting, then that’s all I want.”

She said, “That is the most confident person I’ve ever met. She’s a queen. When I got to be in the same room as her, I was just losing my mind.

“She feels like such a natural person to host ‘SNL’ because she’s so funny and such a great actor and then also just an amazing musician,” Maslany added.

As for what she wants fans to know after watching the “She-Hulk” finale, Tatiana commented, “I just want them to know that I feel like whatever you feel about that finale is great. I love that people have trouble with it. It’s difficult for some people and other people are like, what a relief. I think it’s challenging in the sense that it just dissembles a lot of things that we know to be true, and I think that’s a very exciting notion.”