“The Bachelorette” alum Garrett Yrigoyen is taking the next step in his relationship with yoga instructor Alex Farrar.

On Sunday, Garrett broke the news of their engagement.

He wrote on Instagram, “Our engagement was exactly how I imagined it. I love you so much Alexandra. I can’t wait to spend forever with you lil Al.”

Alex posted her own Instagram about the proposal. She gushed, “When two become one 💍🤍 I love you Garrett Vincent Yrigoyen. I want all of you forever, everyday.”

The pair made it Instagram official two years ago, just after his ex, Becca Kufrin, confirmed their split.

At the time, he wrote on Instagram, “🎃Happy Halloween💀 Picked up a special pumpkin at the patch 👻.”

Garrett received the final rose on Becca’s season of “The Bachelorette.”

Following their split, Becca shared on her “Bachelor Happy Hour” podcast, “I don’t think it’s going to come as a shock to anyone, but Garrett and I have decided to end our engagement. After many conversations, we came to this decision. It wasn’t something that we just arrived at one night. It wasn’t based solely off of one Instagram post or somebody else’s opinions or comments. There’s much more to it. To any relationship, there’s a lot of layers, and it’s not for me to divulge details.”

During his time on “The Bachelorette,” Garrett sparked controversy for a series of questionable social media “likes” on Instagram. 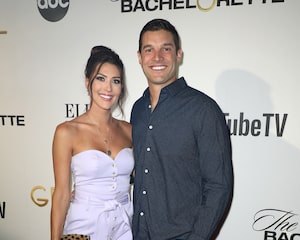 Becca reacted to the backlash surrounding Garrett by telling “Extra” at the time, “Everyone has an opinion — that's what is so great about our country. People are entitled to their own beliefs.”