Bette Midler was back on the red carpet Tuesday night for the premiere of “Hocus Pocus 2,” talking to “Extra’s” Tommy DiDario about getting the movie made and if she would do another one.

“I had such a great time making the first one," Bette said. "We laughed and laughed, we did stuff that none of us had ever done before… Very slapstick… It was a trio like the Three Stooges. I don’t think anybody has ever seen anything from women like the Three Stooges. That was really the impetus for us to get back in doing it.”

Saying it took time to get the sequel made, she admitted, “We tried for many years."

Tommy asked if it was an uphill battle. Bette replied, “Uphill? Are you joking? It was like climbing Mount Everest, but they finally caved. And they caved because of the fans. Really, the fans did it.”

Tommy commented, “You've always wanted to be part of a franchise, so here we are.

Midler said, “Franchise? Can I have a franchise, too?!”

That led Tommy to ask the magic question: “Does that mean if a third one came along, you would be interested?”

The actress explained, “Depends... depends. I'm not going to commit myself. But I will say... this last go-round was tough because of COVID. Nobody knows what's coming around the corner. So you want to say, ‘Yes, I'll do it,’ but life is so strange now and I feel for everybody.” 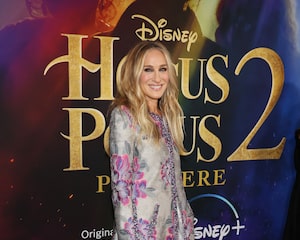 One thing Bette did commit to was a treat when Tommy offered her some candy. “Can I offer you a treat on this spooky night?” he said, adding, “What is your go-to?”

Bette replied, “M&M'S,” but she settled for a Kit Kat.

Tommy told her, “Have as many as you want,” teasing, “Do you want the bucket?”