Britney Spears is at odds with her dad Jamie Spears, but how do her sons with ex Kevin Federline feel about their granddad?

According to Federline’s lawyer Mark Vincent Kaplan, Britney’s sons Sean Preston and Jayden James miss their grandpa, who currently has a restraining order that requires him to “stay away” from them.

The restraining order was issued in 2019 after an alleged altercation between Jamie and one of the sons.

Kaplan told photogs, in a video obtained by TMZ, that once the restraining order expires, Sean Preston and Jayden James will be “reunited” with Jamie.

In an upcoming interview with DailyMail.com, Federline reportedly opens up on the boys’ relationship with their mother. In the broadcast, he reportedly says, "The boys have decided they are not seeing her right now. It's been a few months since they've seen her. They made the decision not to go to the wedding." 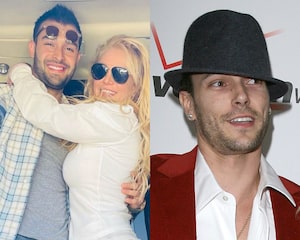 In response, Britney took to Instagram, writing, "It saddens me to hear that my ex husband has decided to discuss the relationship between me and my children ... As we all know, raising teenage boys is never easy for anyone ... It concerns me the fact that the reason is based on my Instagram ... it was LONG before Instagram."

She ended her retort with a plucky, "Have a good day folks !!!"

Her protective hubby Sam also jumped into the fray on Instagram, writing, "To clarify my wife has never posted a nude selfie except of her butt wich is quite modest these days."

"All other posts," he declared, "were implied nudity wich can be seen in any ad for lotion or soap."

He also attacked Federline's contention that Sean Preston and Jayden are estranged, pointing out that they will make their own decisions when they turn 18. Taking a dig at Federline, he wrote the boys may "eventually realize the 'tough' part was having a father who hasn't worked much in over 15 years as a role model. Kevin's gravy train will end soon wich probably explains the timing of these hurtful statements."

Asghari tried to explain his feelings about Federline, writing, "I do not know him personally and have nothing against him aside him choosing to vilify my wife. His character is revealed by approval of the cruel 13 year CShip and his loyalty to Jaimie indicates his approval at time of its conception as well."

A year ago, Federline weighed in on Spears’ conservatorship through Kaplan. Referencing their two sons, Kaplan told People magazine, “The best thing would be for their mom to be healthy and happy. And if either of those things aren’t true, it doesn’t provide for the best setting for custody to be exercised. [Kevin] certainly respects Britney and only hopes the best for her because when the best for her is achieved, it’s the best for their kids. The kids love their mother and he wants there to be a healthy and strong relationship.”

Kaplan stressed, “Britney has not been served well by the conservatorship and it’s not consistent with what she wants. I think that she should be able to challenge that. And if it’s what’s best for her, Kevin supports it. If she’s strong and healthy and wants to be in control of her own life, and can do that in a reasonable, responsible fashion, then more power to her.”