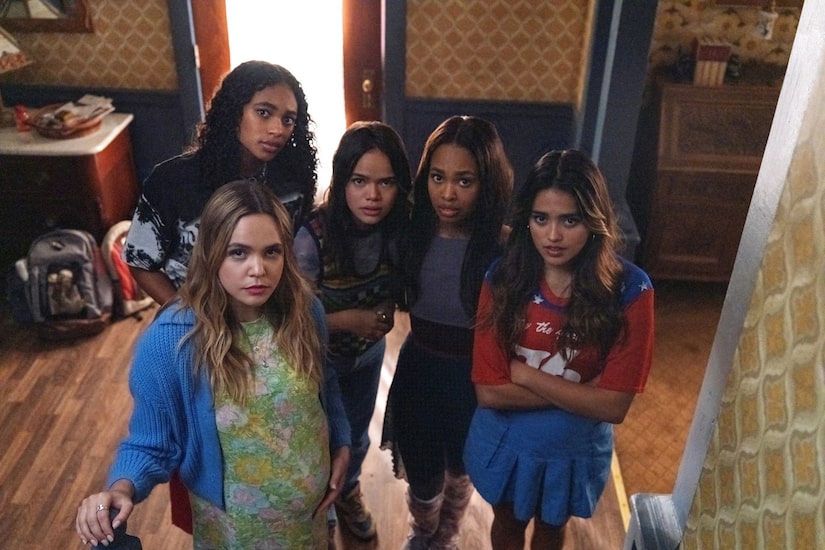 “Extra’s” Katie Krause chatted with the show’s bosses over Zoom to break down exactly why they wanted to make this show, how many As we should expect in the series, what OG liars might pop up, and so much more.

Roberto Aguirre-Sacasa told us the idea to bring “PLL” back actually came from... above.

“I mean, as so often happens in Hollywood, inspiration came from my bosses," he said.

Once they told him, "Well, you do a new version of ‘Pretty Little Liars,'" he said, "You do have to kind of find your inspiration and your reason to do this.”

That’s when he tapped Lindsay Calhoon Bring, who worked with him on Netflix’s “Chilling Adventures of Sabrina,” to help make magic happen.

“The idea of exploring the slasher-horror genre came up and Lindsay and I are both fanatics of that,” Aguirre-Sacasa explained. “We were working on ‘Sabrina’ together, which we did satanic horror, demonic or supernatural horror, ghosts, vampires, you know, all that stuff, but we hadn't done a real slasher-horror story. So once that was sort of the genre, I was all in.”

Aside from casting a new group of little liars, the show does share similarities with the original. The series uses the same iconic theme song from the Pierces — and the show is making twins a major plot point. There’s no Spencer nor Alex Drake, but we meet Kelly and Karen this time around.

“We are horror lovers,” Lindsay explained, “and I feel like you can't love horror without loving creepy, scary twins… The original, of course, had twins and many, many mysteries, but for us, I think that the twins of Karen and Kelly came to us as a horror trope that we really wanted to embrace.”

As for the theme song and that creepy opening sequence?

“We love our main title sequence," Calhoon Bring said. "They did an amazing job, and you know one of the most amazing pieces of iconography of the original ‘PLL’ is that opening sequence — it's amazing.”

“When Roberto says we wanted to do something different, wanted to invest in new characters in a new town, we also still wanted to give that fan service to the ‘PLL’ universe — to the cinematic universe that is ‘PLL’ — and we thought a nice way to honor that was by introducing a new main title sequence, taking a version of that original song that was so iconic in the first show, and really making that song darker and a little grittier and a little scarier. We thought that might help introduce the audience right away to what the tone of the show is. So, that was really out of us being fans of that song, that title sequence, and us wanting to sort of usher in a new tone for the new show.”

OG “PLL” fans will note that multiple As were revealed throughout the original show. We had A, Big A, A-Team, A.D. So we had to ask what these showrunners had in store for their version of A?

“Do You know who A is and will there be multiple As as you look at multiple seasons?” Katie asked.

And since we’re talking about A, we had to ask why they opted to ditch the iconic black hoodie and create a Jason-looking A.

“I think that came with our slasher genre of wanting to set ourselves apart a little bit from the original and find a new tone and new end of the show,” shared Calhoon Bring. “And for us, the most iconic slashers are Michael Myers and Jason and Leatherface and Freddy Krueger, and aside from Freddy Krueger and his amazing one-liners, many of those slashers have a mask. They are silent, they are implacable killers,” she added. “So, we really were inspired by the slasher genre, especially slasher in the ‘70s and ‘80s, and we wanted to create an iconic slasher villain.”

Of course, people are wondering if any of the OG little liars will pop up in Millwood.  And it sounds like it could happen.

Aguirre-Sacasa, who also helmed Lucy Hale’s CW series “Katy Keene,” told “Extra,” “We did very consciously want this show to stand on its own and not feel like a spin-off, so that's why the new town Millwood, the complete new generation of little liars… That said, I do know Lucy [Hale] and Bailee [Madison] are good friends, Bailee considers herself Lucy's younger sister.”

Katie then said Lucy wasn’t closed off to the idea the last time they spoke.

Lucy had more to say about a possible cameo when “Extra” exclusively chatted with her at the “Original Sin” premiere. Watch the video below!