Yara Shahidi has a lot to celebrate. She just graduated from Harvard, she’s taking on the role of Tinkerbell in the upcoming live-action “Peter Pan & Wendy,” and she’s starring in the new season of “Grown-ish.”

“Extra’s” Katie Krause chatted with Yara about all of it, joined by her “Black-ish” brother Marcus Scribner, whose character Junior is the new big man on campus for “Grown-ish” Season 5.

Yara said of her graduation, “I had so much family come out to support, so many people just showing love, because it really did take a huge village to make something like this work and it took a lot of support to manage both.”

She got some support from stars too, including Reese Witherspoon and Michelle Obama.

Shahidi said she was “shocked” that Obama used social media to congratulate her, even though the former first lady did write her a recommendation letter.

“She uses her social media so diligently to get people to vote... and the fact that I made it on there is crazy,” Yara said.

Next up, she’s on a journey to Neverland.

Shahidi said of playing Tinkerbell, “What’s funny is I didn’t film with the rest of the cast. Everyone was on these epic sets in Vancouver and places and I was in a garage… I was a part of the motion capture technology to make me small, so I met my castmates as grip stands with their faces taped on them.”

Yara dished, “What I’ve seen, it is coming together really beautifully. It’s a fun rendition… We’re speaking about these properties, similar to ‘Grown-ish,’ where we’re playing on a classic but intentionally bringing in such new energy.”

She said of the footage she has seen, “It is so impressive… Motion capture technology is so impressive, but while you’re acting you’re like, ‘How does this translate on-screen?’ But it’s just incredible the world that they’ve built.”

The actress called seeing herself as Tinkerbell “surreal,” insisting, “To take on such an iconic character, I feel like I still haven’t wrapped my head around it.”

After liking each other for a long time, the characters finally started dating in Season 4. Yara said Season 5 sees their relationship developing even further.

“You see Aaron on his path, and you see Zoey on hers, and they’re trying to consistently negotiate what it means to be in the adult relationship where their life no longer revolves around this kind of unifying campus experience.”

He said of Junior’s college experience, “I think Junior has always been the kind of character who doesn’t really allow himself to put himself out there. He definitely is true to who he is, but he’s definitely a one-relationship guy, doesn’t go to parties. And as ‘Black-ish’ has progressed, he’s grown more towards that and obviously approaching adulthood and whatnot. He’s finding himself, and I think ‘Grown-ish’ really illustrates that well.”

When asked if there is more ahead for “Grown-ish,” Yara teased, “We wouldn’t have put all this energy into bringing Marcus over for it to be this random epilogue to the show. If anything, it is kind of this re-synergizing of the show in a really exciting way.” 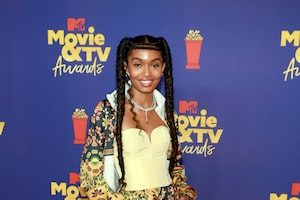 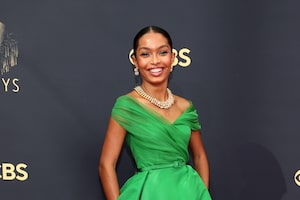 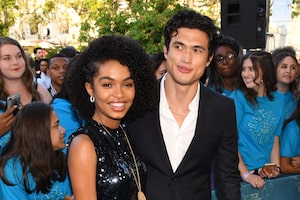