“Extra’s” Rachel Lindsay sat down with the team of the Apple TV+ series to talk about Ray and his role in the true-crime thriller. debuting July 8.

In the show, Ray plays the father of Jimmy Keene (Taron Egerton), a football star-turned-inmate who cuts a deal with the FBI to shorten his sentence if he can elicit a confession from a fellow prisoner believed to be a serial killer.

Taron shared of his on-screen dad, “You can never learn to act like another actor… But you can learn something, you can be inspired [by] their level of commitment, and that’s certainly how I felt about Ray. He just brought so much of himself to the role, such a level of dedication. He never let his energy drop for the whole time he was there. He was amazing to watch and work with.”

Executive producer Dennis Lehane told Rachel of working with Liotta, “It was a dream come true. I had written the part for him. I was praying he would take it… He was so dedicated to his craft, he was such a professional, he had these nice touches.”

Lehane recalled, “He wasn’t a ‘huggy’ guy,” revealing, “The first thing he did when he saw Taron was hug him, and he established the father-son relationship right of the bat.”

Dennis added, “He never did the same take twice… Taron and Ray, who shot their scenes early in the process, they really set the tone for the rest of the production.”

The showrunner spoke with Ray just three weeks before he died, saying, “He said, ‘You got something in the next thing for me?’ I said, ‘Of course.’ He said, ‘Make it a big part,’ which was such an actor thing to say.”

Paul Walter Hauser played suspected serial killer Larry Hall, and the actor said of working with Ray, “There’s that thing when you are a fan of somebody for so many years… He was so chummy… wanted to crack jokes, gave me his phone number the first day that I met him, said, ‘Hit me up, we’ll go to dinner with my girl…’ Really warm in a way I didn’t expect. I wish I could have spent more time with him… He is and will be notably missed.” 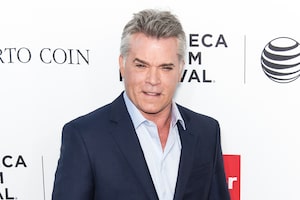