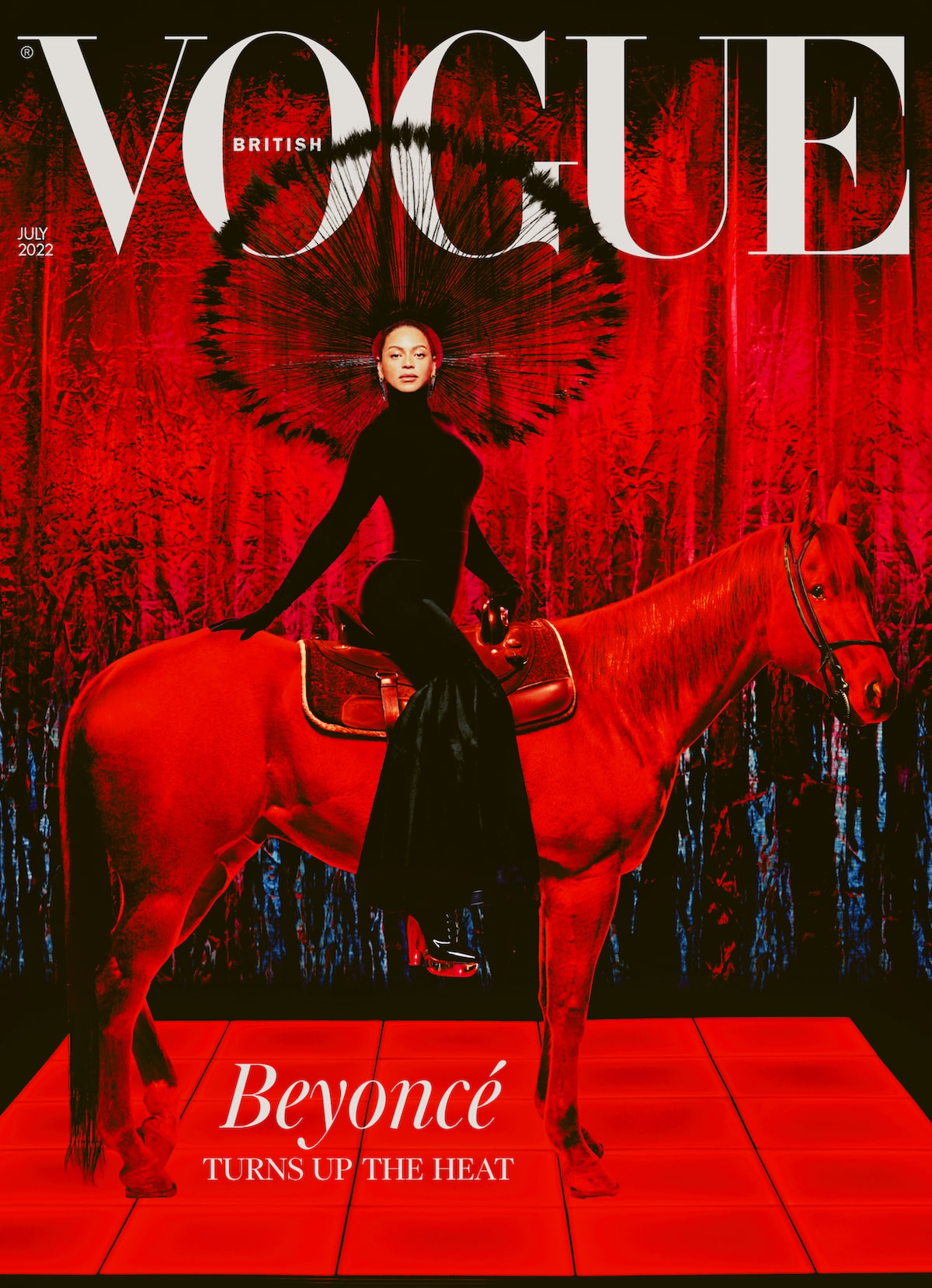 On the cover, Beyoncé looks regal on a Stetson horse. She wears a feathered headpiece and high-neck black dress.

Beyoncé was photographed by Rafael Pavarotti and styled by Harris Reed. 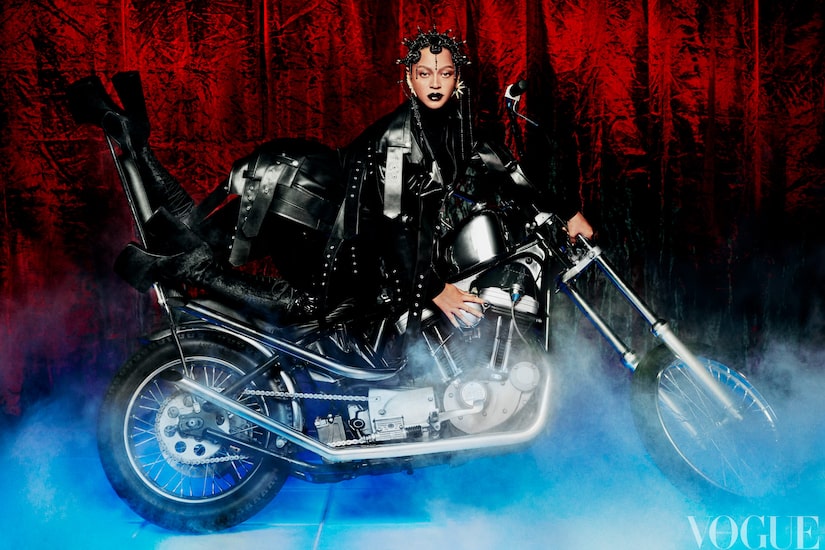 Vogue’s editor-in-chief Edward Enninful worked with Beyoncé on the “direction” of her shoot. He shared, “Beyoncé Knowles-Carter, a writer of excellent and lengthy texts, had taken to messaging me as we brainstormed the direction of her Vogue shoot together. A fashion fantasia spun from the tropes of club life during the last century’s final quarter.”

Enninful noted that Beyoncé “wanted to play with fashion like never before.”

Beyoncé also opted for a Goth look, wearing an all-leather ensemble on a motorcycle! 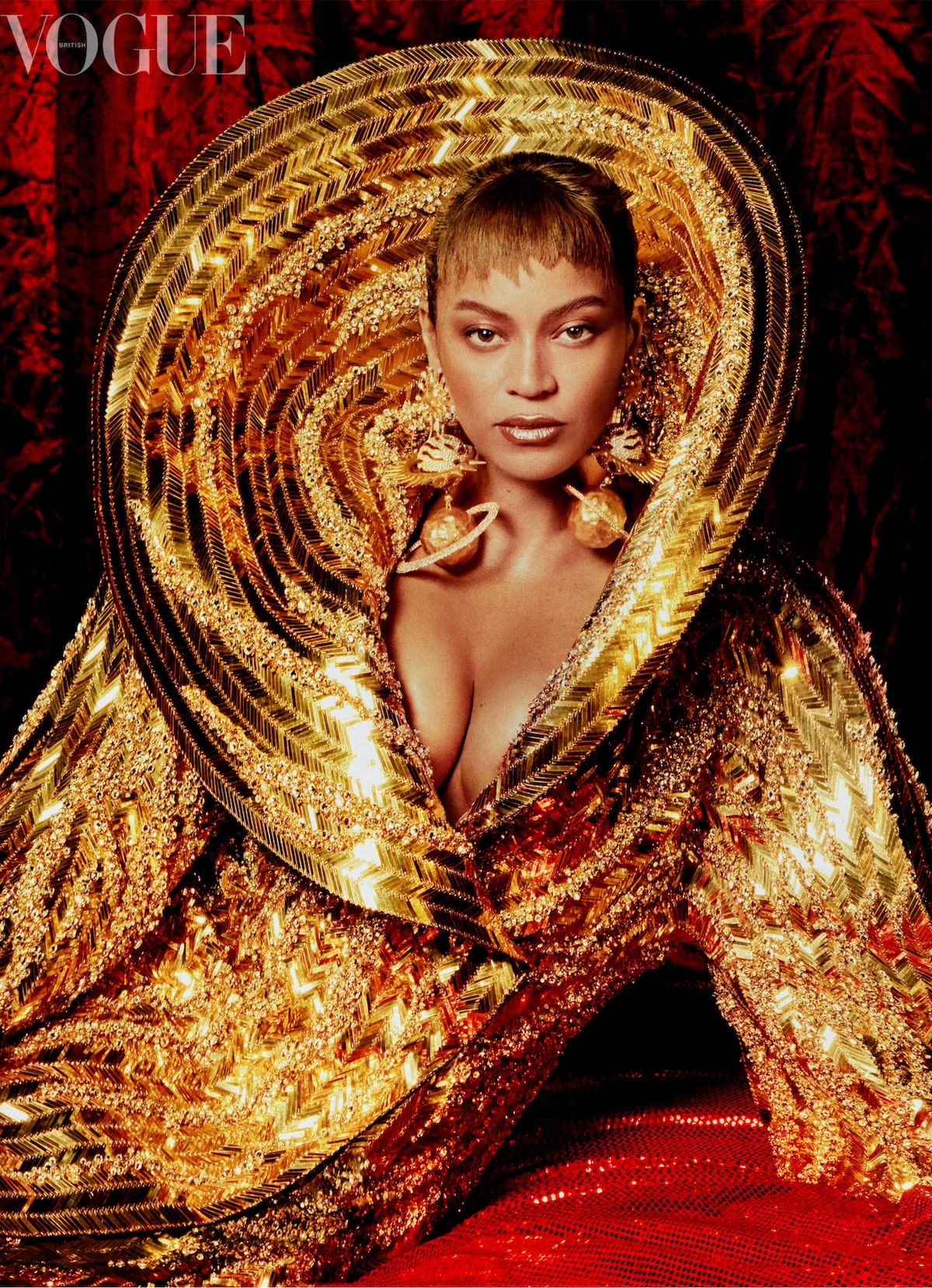 Edward revealed what it was like working with Queen B in person, saying it was “a magical mood” on the set. “B was walking around feeling easy and free to be herself. Her husband and kids came to surprise her on set. It was a family day out — albeit a slightly surreal one.”

She even invited him over for dinner at her home in Los Angeles. He revealed, “I find myself truly en famille, sitting at Beyoncé’s dinner table on a Sunday night. I’m a little stunned at how relaxed it all is… As a scrumptious dinner of ribs, cream corn, peas and mashed potatoes is served, I’m not sure the mood could be any cosier… At this point, her ironclad devotion to professionalism and privacy is legendary and yet here she is at home with her hair loose, not a stitch of makeup on, wearing a hoodie, just being herself.”

Beyoncé described her family as “my earth, my heart, my soil and my sanity.” Edward explained, “ A great deal of protection goes into allowing her to experience her pocket of the world as calmly as possible... This is a precious time in her life. Now 40, she’s feeling so good as a mother, an artist and a woman.”

According to Enninful, a “thrilling abundance” of new music from Beyoncé is coming!

Beyoncé told Edward that creating her new album was “a long process.” Due to the pandemic, it allowed her more time for every decision regarding the album, something that she “likes.”

Her new album, which has 16 tracks, is her first since her visual album “Black Is King,” which was released in 2020.

Last year, Beyoncé teased that she has been recording in the studio for more than a year. She told Harper’s Bazaar, “With all the isolation and injustice over the past year, I think we are all ready to escape, travel, love, and laugh again. I feel a renaissance emerging, and I want to be part of nurturing that escape in any way possible. Yes, the music is coming!"