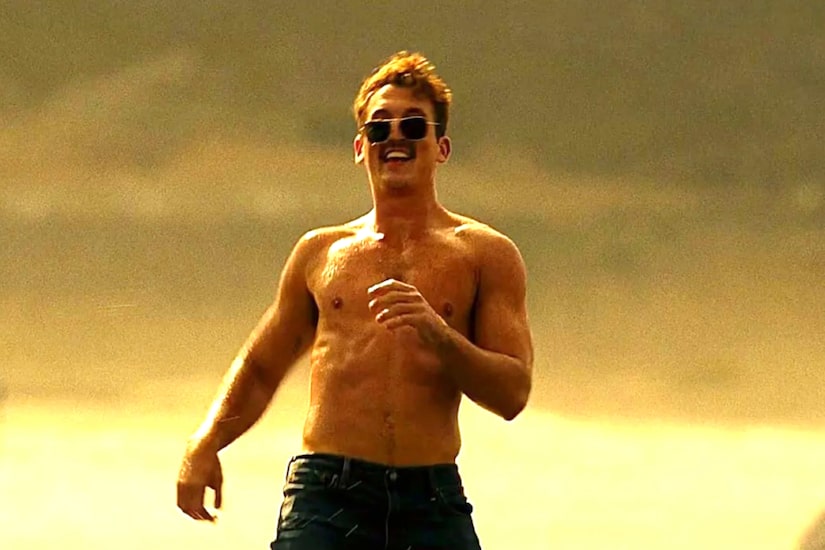 Miles Teller and “Top Gun: Maverick” just took the box office by storm — and ignited a social media frenzy, thanks to a shirtless football scene!

In a new interview with “Extra’s” Renee Bargh, Miles reacted to all the attention. He shared, “That’s really a dance that like me and my buddies have kind of done when everybody’s dancing very seriously. It was just always something we would do to kind of just break the ice a little bit… I didn’t even know that the camera was on me at that point.”

Teller called it a “nice surprise” when he saw it in the movie.

When Renee noted that it was an “iconic moment,” he said, ‘We’ll it’s ‘Top Gun.’ Hopefully you get an iconic moment or two.”

As for the positive reception of “Top Gun: Maverick,” Teller commented, “I didn’t know what to expect because I’ve never been a part of something like this… a huge blockbuster movie.”

Teller reunited with his “Top Gun: Maverick” director Joseph Kosinski for his new film “Spiderhead,” which sees him going toe-to-toe with Chris Hemsworth.

Miles raves about Chris, saying, “I just think everybody, any actor who works with Chris will benefit from him because he’s just such a wonderful guy, but he’s really an incredible actor. I think people are starting to notice that more and more.”

When asked how he felt to go up against Chris in the movie, Miles referenced “Thor,” saying, “I was excited that he didn’t have all of his armor… He’s not such a tough guy when he doesn’t have his armor… Thor always wins ,so at least in this… my character had a shot.”

As for why he signed onto the project, Teller said, “I just found it to be a really kind of challenging performance.”

He added, “I had a lot of empathy for the character of Jeff. I think once the audience realizes in the beginning, they know, he’s kind of going through something… once you fully understand what led him into this situation, he was just a guy that I really felt for and I wanted to see him make it through.”

Teller also has a shirtless scene in “Spiderhead.” He dished, “I was not in ‘Top Gun’ shape, but I was in good enough shape… Even if you’re in civilian shape, it doesn’t really compare to the shape that Chris gets in — he’s massive.”

Miles and Chris shot the movie in Australia during the COVID-19 pandemic. Miles noted that he had “the best time,” saying, “I couldn’t believe how much of the coastline helped, like the beaches… just how expansive they are and how quickly the landscape can change, too.”

Despite all the fame, Teller is still not on Instagram. He said, “At this point, I have to just stay off. If I go on now, people would be like, ‘Oh, you sell-out!’”

Though he’s not gramming, his wife Keleigh Sperry has an Instagram account, which is filled with photos of him! He joked, “She’s like my unpaid social media manager.”

“Spiderhead” is streaming on Netflix June 17.