Justin Bieber has been forced to cancel some tour dates, and he is revealing it is due to a health battle.

On Friday, Bieber revealed that he is fighting Ramsay Hunt syndrome, which “attacks” the nerve in his ear.

As a result, he is now suffering facial paralysis.

In a video, Bieber demonstrated that he couldn’t move half of his face, saying, “This is pretty serious.”

Bieber stressed the importance of resting, saying, “Obviously, my body is telling me to slow down… I’m going to be using this time to rest and relax and get back to 100%.”

Days ago, Bieber announced that he had to postpone some shows since his “sickness is getting worse.”

Without going into specifics, he said on his Instagram Story, “Can't believe I'm saying this. I've done everything to get better but my sickness is getting worse. My heart breaks that I will have to postpone these next few shows (doctors orders). To all my people I love you so much and I'm gonna rest and get better."

Just a few months ago, Bieber’s wife Hailey had her own health scare, suffering a blood clot in her brain.

In April, she opened up about the terrifying ordeal in a YouTube video. 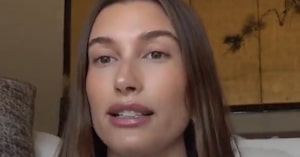 Following her “ministroke,” Hailey went through several tests to determine what led to her blood clot.

Doctors discovered that Bieber had a patent foramen ovale (PFO), which she described as “a flap between the right and left chambers of the heart.”

Bieber then underwent a procedure in which a “button” was used to close her flap.