“Senior Year” star Rebel Wilson is in a new relationship!

On Thursday, Wilson broke the news that she is dating fashion designer Ramona Agruma. Along with a photo of her new girlfriend, she wrote on Instagram, “I thought I was searching for a Disney Prince… but maybe what I really needed all this time was a Disney Princess 💗🌈💗 #loveislove."

"Gilmore Girls" actor Arielle Kebbel wrote, "So happy for you both."

A source close to Wilson told People magazine, “Rebel's in an amazing place and I've never seen her happier."

While Ramona has her Instagram private, she is the founder of clothing company Lemon Ve Limon, as well as a brand ambassador for Bee Goddess Jewellery.

Last month, Wilson revealed that she met someone special “through a friend,” but didn’t reveal her love’s identity.

She shared with People magazine, “We spoke on the phone for weeks before meeting. And that was a really good way to get to know each other," she said. "It was a bit old-school in that sense — very romantic.”

“I think going through the process of finding more self-worth, I think that what you want in a partner is elevated and so it's great to have someone who feels like an equal partner and be in a healthy relationship," Wilson stressed. "There were times — I'm not saying with all my exes, they're great — but there were some times that I was probably putting up with that I shouldn't have. So it feels different to be in a really healthy relationship."

In November, Wilson revealed that she dated “a few people over the summer,” adding, “But at the moment, I'm taking a break and just trying to see if it happens organically in real life or through friend setups or something."

"From every relationship, you learn stuff all about yourself and what you're looking for," she pointed out. "I haven't quite met my match just yet, but here's hoping." 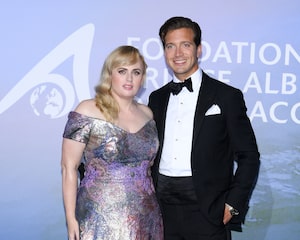 Wilson previously dated Jacob Busch, but they split in February 2021.