A day after news broke about Harrison Wagner’s death at age 27, his brother Peter is paying tribute to him on social media.

On Wednesday, Peter posted a series of throwback photos. He wrote on Instagram, “Always with you.”

Earlier this week, Harrison was found dead in a parking lot in North Hollywood.

The statement continued, “Once the tests/studies come back, the doctor evaluates the case again and makes the cause of death determination.”

Harrison is the youngest son of Jack and Kristina Wagner, who were co-stars on “General Hospital.”

After hearing about Harrison’s death, “General Hospital” EP Frank Valentini tweeted, “On behalf of myself and the entire #GH family, our hearts go out to Kristina Wagner, Jack, and their family during this devastating time. We ask that you respect their privacy and keep them in your thoughts."

Jack and Kristina were married for 13 years but divorced in 2006. 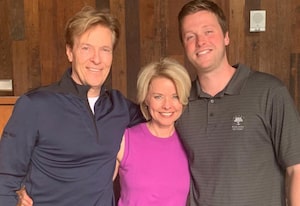 Jack and Kristina have not publicly commented on their son’s death.

It is unclear whether Harrison’s past struggle with addiction played a part in his death.

In 2016, Harrison went missing for almost a week after suffering a relapse.

Harrison’s last Instagram post was on May 23. Along with a photo of himself sitting on a bench staring off into the distance, he wrote, “Focus. YOU are left with YOU and your thoughts.”

Harrison described himself as a “crazy boy” who enjoyed hiking, dogs, and time at the gym.

A few days before, Kristina shared a photo of Harrison and his older brother Peter. She wrote, “A bittersweet farewell to the place we called Wagner Ranch for 25 years. The prickly beauty of the high desert and a landscape surrounded by national forests always reminded us that there is peace when you are willing to look for it. Oh Ranch, it’s time to part. We’ll miss you so much with our heartwarming memories. We know that there are many opportunities for joy ahead.”