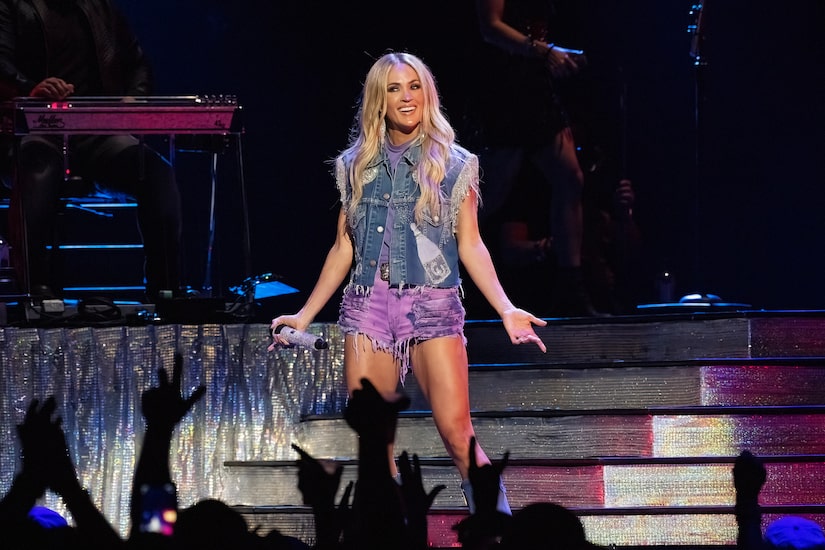 “Extra’s” Alecia Davis spoke with Carrie, who told her all about it and life on tour.

Discussing the event, Carrie shared, “CMA music fest week, everybody is in town just having a great time. Just wanted to create this immersive place where people could come be a part of ‘Denim & Rhinestones.’ There is a lot of that going on. We have different photo ops... various outfits I have worn… We’re giving out drinks. Just come by The Bell Tower here in downtown Nashville.”

As for choosing “Denim & Rhinestones” for her album title, Underwood explained, “When we wrote the song, I was like, ‘We can do a lot with this... Immediately you get some picture in your head when you hear denim and rhinestones… We bring the bling, all the denim, all the fringe… We are in a great time of fashion where there is no short supply of denim and rhinestones.”

For the interview, Carrie wore denim shorts and rhinestone boots, showing off her toned legs, which have gained tons of attention! She commented, “The boots… they are very heavy. I feel like they help with the leg workout for the day, like I have ankle weights on.”

Of her look, Carrie said, “I love it. I love the girly dressing… Onstage, there is like a toughness I kind of want to have… I just want to sing and not worry about what I am wearing. What’s better than a pair of cutoff denim shorts?”

Underwood will be heading out on tour soon. When she’s on the road, Carrie shared, “It’s easier to maintain a routine when I am on tour. I don’t have a house to clean, I don’t kids to cook for because there is catering and room service… I don’t eat that. You will never see me in catering or ordering room service. I go to the grocery store. I have my own food… Having those things on hand and taking care of myself.”

She added, “I usually work out longer when I am on the road just because I have more time.”

That includes working out with her husband Mike Fisher! She dished, “We work out in the same space quite a bit. We have definitely done partner workouts. He does his thing, I do my thing and try to stay out of each other’s way… I think I impress him on working out.”

The couple have two boys, who have traveled with them as well! She said, “This tour, I think for the most part they will be home. The last tour we set up a playroom in the venues… My last tour, my youngest son was 3 months old when we went on the road.”

How does she do it all? She answered, “A lot of juggling.”

Back to music, her first single on the album is called “Ghost Story.” Explaining the meaning of the song, she said, “I loved the feel of it… I did love saying I’m the one that got away but in a different kind of way, in a haunting kind of way.”

When Alecia commented, “We all secretly wonder if we are somebody’s ghost story,” Carrie responded, “I think to some extent, I know we all have one in some way… It has to be unfortunate if you at one point you dated someone who has a career like this now.”

While Carrie has a clothing line and books, could her own talk show be in the works? She answered, “I don’t think so. I am not a good talker… I’m a quiet person. I am okay with silence, so I would probably be a terrible talk show host.”

Carrie stressed the importance of staying focused on what is right in front of her, saying, “Releasing this album and going out on tour, and we will see what opportunities arise.”