“Worst Cooks in America” winner Ariel Robinson, 30, was sentenced to life in prison this week after a jury found her guilty of homicide by child abuse.

According to WYFF Tori died of “multiple blunt-force trauma” and Judge Letitia H. Verdin told Robinson after the verdict that she’s “never seen anything like this.”

Verdin explained, "I think medical testimony in this case was incredibly heartbreaking… I can say that in my 13, 14 years of being a judge, I've never seen anything like this. Not even approaching it," adding, “What compounds it is, I understand what your attorney is saying, perhaps you snapped at the moment but then why let this child suffer and not get her medical attention that she so desperately needed as she lay dying in her own bedroom? Based upon all that, the sentence of the court can’t be anything less than life in prison.” 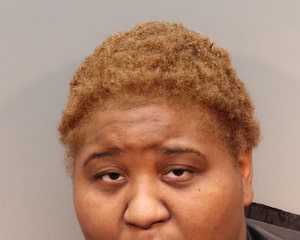 EOnline.com reports that during a court hearing Ariel’s husband Jerry “Austin” Robinson had accused his wife of “beating Tori to death” out of frustration. He said he walked into find the reality star holding a belt and told her she had gone “too far this time.”

When Robinson took the stand in her own defense during the trial, she claimed that Austin was to blame.

She said of finding Tori injured, “I hollered for Austin to come upstairs and he came in the room when she was on her stool and he looked at me and he said, ‘Is she breathing?’ And I said, ‘I hear her trying to breathe’… and so he said, ‘Should I call 911?’ I said, ‘Yeah, call 911 because I don’t know what to do.’”

According to WYFF, prosecutors said evidence showed that Ariel was to blame for Tori’s death, not Austin.

Austin previously pleaded guilty to aiding and abetting homicide by child abuse. He is awaiting sentencing and faces 10 to 20 years in prison.

According to the Simpsonville Police Department, officers responded to a call of an unresponsive juvenile victim on January 14. The child was later pronounced dead at a local hospital.

At the time, arrest warrants for Ariel and Austin alleged both inflicted a “series of blunt force injuries, which resulted in the death of the victim.”

Ariel was the Season 20 winner of Food Network’s “Worst Cooks in America.”