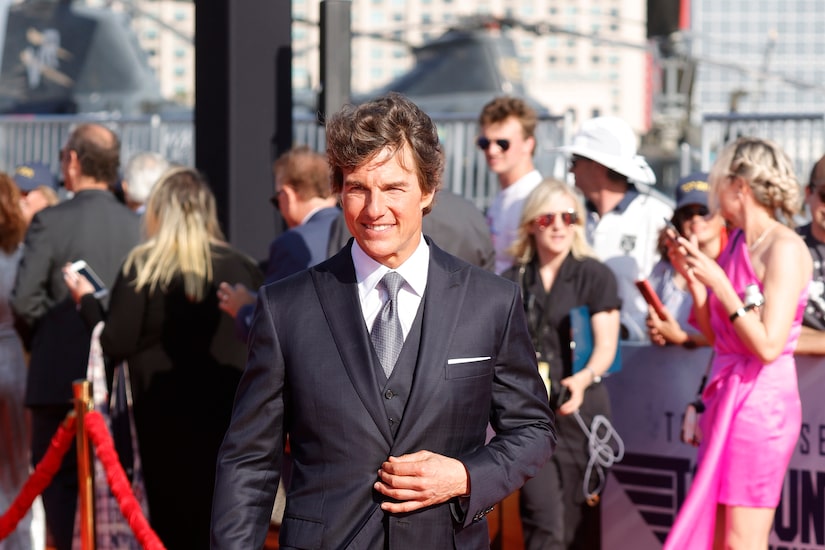 After making an epic helicopter entrance at the San Diego world premiere of “Top Gun: Maverick,” Tom Cruise spoke to “Extra’s” Rachel Lindsay about the long-awaited sequel, as well as working with Lady Gaga on the movie’s song “Hold My Hand.”

How did his collaboration with Gaga come about? He answered, “I called her… We shot most of the film and we had Lorne Balfe to produce the score, we had Hans Zimmer… There was a door that we were trying to open musically… We were searching for a long period of time… She composed the score… She sent the song over… The moment we heard it was just, here’s this artist, we are in England, and she is all the way over in America. It was almost as if she was talking to us… It was perfect.”

“I called her and I said, ‘Your story, this story, how it comes together, it became the heartbeat of the score,’” Cruise continued. “I went to Vegas to thank her… and then I was going to come back and see her jazz show, then the pandemic hit… The next live show I was able to see was her jazz show, two years… It was a moment of celebration for us… Our film together… The story of how her score is laid in, to just build in that moment — I feel grateful.”

Tom admitted it was “daunting” making another “Top Gun” movie, expressing his relief and gratitude over how it is being received. He said, “For 36 years, people have been wanting to see this movie. You go, ‘Okay, how do we do this? How do we capture lighting in the bottle in that way again?’ I am just so happy for them. I made it for audiences to just go have a great time at the cinemas… Fills my soul.”

When Rachel noted that this movie is better than the original, Tom quipped, “You can keep saying that. I am relieved and grateful.”

He also dished on how his character Maverick has changed over 36 years. He commented, “He’s still Maverick… He still has to have the spirit of Maverick… At the end of the first one, he learned to be a better team player… He is still that guy that has to push it a little bit — he just can’t help it… With any movie, you need a character journey… There’s wonderful problems, life dramas.”

Tom handpicked his cast. He said, “My movies are very much ensemble. I love everyone to shine… I want those characters to come alive… That’s why I train them in the planes and the jets, and taught them about editing and lighting — so they understood the tone.”

Cruise praised his cast, saying, “You are looking at these actors and you want to celebrate them… I want them to come alive. How do we develop these characters?”

Tom is leading the next generation by example. He commented, “I want to see them do well. I was fortunate to work with many people who were generous to share their craft with me. It is an art form that needs to be handed down… I want to empower people to own the screen.”