“Bringing Up Bates” star Trace Bates is ready for marriage!

Bates, 25, popped the question to girlfriend Lydia Romeike, 24, on March 21 at the Embassy Suites in Knoxville, Tennessee.

Trace told Us Weekly, “It’s hard to describe the emotions you feel when you are fixing to ask the girl of your dreams to marry you. I just know that Lydia is my best friend, and she’s the most positive thing in my life. It’s hard to imagine a day going by without seeing her or talking to her. I knew I wanted her to be by my side forever, but planning the where and the how and all of the details of the engagement was a task!”

“I wanted the timing and setting to all be a huge surprise, so I was grateful for the help of my sister Josie [Bates] and her friend Chloe,” Trace shared. “It’s hard to believe we are finally engaged and are making wedding plans!”

Lydia was surrounded by flowers and candles when Trace asked for her hand in marriage on the rooftop of the hotel.

Romeike was “shocked” by Trace’s proposal, saying, “I thought Trace was in Nashville helping his brother Lawson renovate his newly purchased home. He even texted me pictures of himself working in the house, which I later found out had been taken earlier just for this occasion. He had our friend Chloe ‘hire’ me to do a photo shoot on the roof, so I actually thought I was going to work.”

When Lydia opened the door to the rooftop, she saw Trace, who was “standing his suit in front of this gorgeously decorated backdrop and I think I just stood there stunned for a few minutes.”

She gushed, “I don’t think I’ve ever admired him more or been more speechless! He went through so many hoops and planned so hard to make this day perfect for me, and I feel so blessed to be preparing to marry someone that loves me so much. I’m overjoyed!”

The pair was dating for seven months when he got down on one knee.

They made their relationship Instagram official in December. He wrote, “So blessed to call you mine ❤️❤️❤️.”

Trace previously dated Chaney Kahle, but they split in February 2020.

Just months ago, Trace’s brother Lawson got engaged to his girlfriend Tiffany Espensen after eight months of dating. 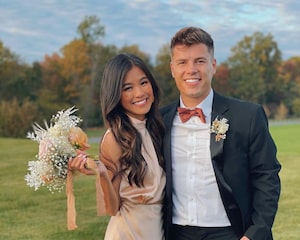 Bates told People magazine, “It has been a roller coaster of a few days so far, from our first stop at the Colosseum in Rome, to a Vespa ride through the Siena countryside, to a lovely evening dinner in San Gimignano, to a horse and carriage ride through Florence — all leading up to the main reason I'm here: asking Tiffany if she would spend the rest of her life by my side."