Elle Fanning is playing Michelle Carter in "The Girl from Plainville," which takes on the true-crime texting suicide case that shocked the nation!

The series is inspired by the true story of Carter, who was found guilty of involuntary manslaughter after her boyfriend Conrad Roy committed suicide in 2014.

“Extra’s” Jenn Lahmers spoke with Elle, who opened up about how she prepared for the role and why she didn’t meet with the real Michelle Carter.

Fanning was aware of the case before she took on the role. She said, “I knew as much as the world knew at the time, I remember it being on my TV screen, and following it a little bit and seeing photos of this really beautiful girl , who was kinda being very villainized in the media… that’s all I knew. I knew obviously the story ended in a very tragic way.”

Carter was sentenced to 15 months in prison and five years of probation after she was found guilty of convincing Roy to commit suicide over text message. In 2020, Michelle was released from prison more than three months early for good conduct.

Fanning didn’t feel like it was “appropriate” to reach out to Carter. Since she had access to the “haunting” text messages between Michelle and Conrad, Elle had “as much as I needed to be able to do the part.”

As for how she prepped for the role, Fanning “re-watched” episodes of “Glee” and “Fault in Our Stars” to get into the mindset of Michelle, who was a “real fan of ‘Glee.’” 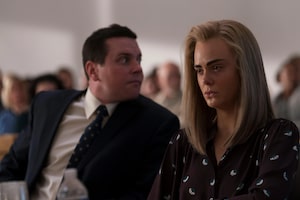 Elle noted that the show “spans seven years” so there are “different versions of Michelle.” She said, “The only footage that I have of her is that courtroom footage so everything else you kinda have to imagine and piece together yourself.”

Recalling a scene in which she had to mimic Lea Michele’s singing in “Glee,” Fanning commented, “It’s a bit twisted… When I read the pilot, I was like, ‘That’s a challenge.’ That’s a big moment there and one of my favorite scenes I’ve ever done.”

Calling the scene “very hard” to shoot, Fanning revealed that she sang the song for “six hours” and even took notes on Lea’s mannerisms to nail it! She shared, “I had a LeapPad and I wrote down every single gesture, every time Lea Michele closed her eyes, every time she would get emotional at each moment on every word. I have that written out so I would mimic it.”

Colton gave his take on Conrad and Michelle’s relationship, saying, “Young people like many young people who are looking for themselves and i personally think that its asking the question of are they looking for it in the wrong place by valuing ourselves more online.”

As for playing the role of Lynn, Sevigny admitted that it had a “profound effect” on her since she recently became a mom too. She added, “The emotions were always right there. I was working away from my child for the first time so missing him was a new experience and a confusing thing to navigate.”

In Chloë’s opinion, did Michelle find pleasure in grief? She answered, “I think that she did. I think the pleasure came from like wanting people to like her… She wanted attention, she wanted friends, she wanted  connection, and she thought that she would get that, that she'd get sympathy from people through this.”

“The Girl from Plainville” is streaming now on Hulu.