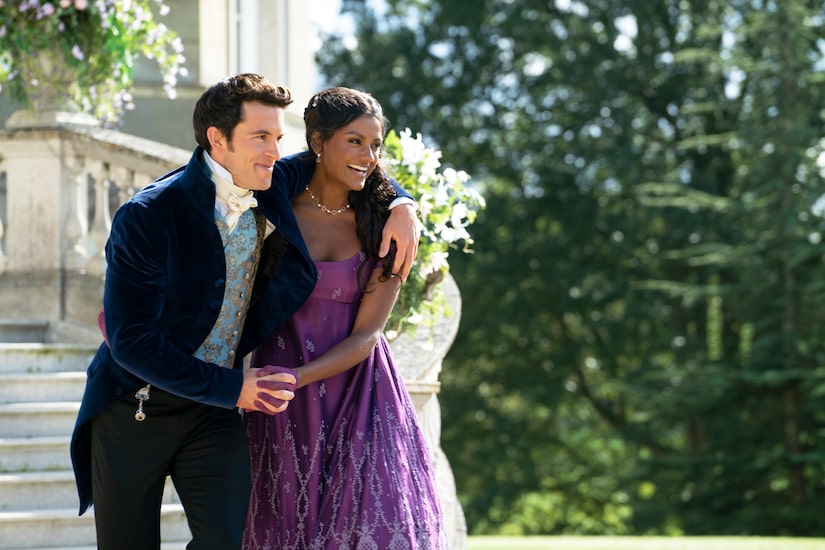 She confirmed that her character Kate Sharma will be back for Season 3, saying, “We will definitely see more of Kate and Anthony post-marriage… who knows what they’ll get up to, but I’d love to see them… just enjoy their love together and have what they deserve.”

The show was viewed for 193 million hours on its debut weekend, which Simone thought was “insane.” She went on, “I’m just so proud of the entire cast and crew who have all come together to make this show what it is and to receive such a ginormous reception… We all worked our socks off last year.”

Ashley noted that it was a “joy” to play opposite Jonathan Bailey. She said, “To go hand in hand with him and bring Kate and Anthony’s love story to life.”

Simone was “very grateful” for the opportunity to play Kate, who she empathizes with.

As for how she relates to her character, Ashley commented, “I share that fierceness that she has and I really admired that in her and I was always rooting for Kate.”

"It's groundbreaking now, but maybe one day it will just be so normal," Ashley said. "That's the goal, just continue sharing the space."

Simone also praised her co-star Charithra Chandran, who plays her sister Edwina. Describing Chandran as a "diamond," she said, "I learned so much from her."

Ashley recently attended the Vanity Fair Oscars Party, but she didn’t stay for “too long” since she had a “super early start.”

She dished, “I met some awesome people, people, who, you know, are just so warm and lovely. Everyone was having a great time.”

Anthony also opened up on giving herself a tattoo with a pendant. Watch!