“The Bachlorette” alum Andi Dorfman, 34, and boyfriend Blaine Hart, 35, are taking the next step in their relationship!

On Wednesday, Dorfman announced their engagement.

Along with posting a photo of them kissing on the beach with her engagement ring front and center, she wrote on Instagram, “WORTH THE WAIT!!!!”

Blaine popped the question at sunset on the beach. She told People magazine, “Blaine told me he made dinner reservations and asked if I wanted to do sunset cocktails on the beach, which is something we do all the time here in L.A.”

“We get down to our spot, pour some wine, walked toward the water and when I turned around, he was on one knee," she elaborated. "I don't even remember what he said, I just remember hugging him and crying. I didn't even remember seeing the ring at first. And then after, the best part was, he told me instead of dinner we were going to stay the night at Hotel Bel-Air. So we drove home to pack a bag and when I opened the door to our home, both of our families and my closest friends were there to surprise me. That's when I really started bawling."

Dorfman revealed that Hart was planning “for a month to get it all organized.” He was able to organize for their families to come without her knowing since she had “absolutely no clue!”

Before he got down on one knee, they did pick out a ring from the same jeweler that made her mom’s engagement sparkler.

Andi shared, “I love that it is more traditional with the halo and split shank but mostly, I love that I look at it — and as cheesy as it sounds — it symbolizes so much love and happiness.”

Blaine asked for Andi’s parents’ blessing in Atlanta before he popped the question. She noted that her man “even called my sister to ask for hers as well.”

While they just got engaged, they already know what they want for their wedding! She dished, “I think we would love to do a wedding in Italy where we rekindled our relationship last summer.”

She admitted, “I'll be honest, the idea of planning a wedding is overwhelming for me but I joke with Blaine that I want to play the role of the groom during the wedding process and maybe he can narrow every option down to three and I'll choose from there. We'll see if that happens."

Andi was previously engaged to Josh Murray, who she met on her season of “The Bachelorette.” They called it quits in 2015. 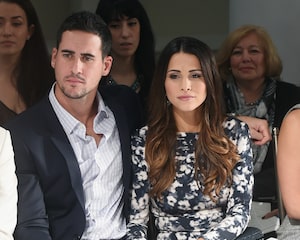 After her public split with Josh, Andi opted for a more private relationship with Blaine.

She pointed out, “I wanted to protect Blaine a bit from the world of the public eye and I didn't want that to play a role in our relationship. But it's fun for me to share it now, and it makes me feel really good to see that people are truly happy that I finally found love."

As for why their relationship works, Andi revealed, “Not only do we love each other tremendously, but we like being with each other. We both just want to make the other happy and in turn our relationship is a lot of fun. That's the word I'd use to describe our relationship: fun."

"It's not about it being easy or hard — that's not our barometer," Dorfman stressed. "I knew Blaine was different and I remember just hoping that the shoe wouldn't drop and this was the real deal and it turned out it was!"

Andi and Blaine made it Instagram official in late 2021. On the last day of December, she posted a kissing pic, gushing, “By far my favorite thing from 2021 ❤️.”

In January, a source told Us Weekly that the pair had been dating for a few months. They said, “[Andi and Blaine] haven’t been apart for too long of a stretch of time since they met this summer. They try not to let too much time go by without seeing one another.”

The source went on, “They are so very happy and can’t wait to see what 2022 brings for them. Andi is totally smitten, and they are the perfect match. Her friends and family absolutely adore Blaine!”

Dorfman was looking to 2022. To celebrate the new year, she wrote, “Cheers to a year filled with love and sparkles. 2022 … I have a feeling you might very well be the best one yet! Happy New Year ✨💕🤞🏻.”