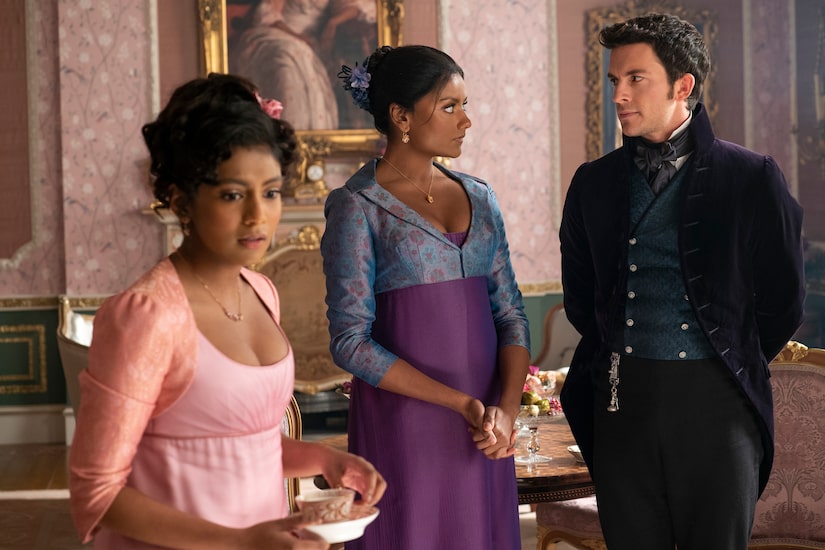 “Bridgerton” is back for a highly anticipated Season 2!

This time around, Anthony Bridgerton is searching for a wife, only to find himself torn between sisters Kate and Edwina Sharma.

“Extra’s” Rachel Lindsay spoke with Jonathan Bailey, Simone Ashley, and Charithra Chandran about the new season and what to expect from their love triangle.

Simone and Charithra are both new additions to the show.

Simone opened up about receiving the call that she got the part of Kate Sharma, sharing, “I was on set for a movie I was doing at the time, and I was being called to go to set and I wasn’t allowed to tell anyone, so I had to put my phone on flight mode, leave it in my trailer, and go to set and act as if nothing happened.”

She added, “And at the same time, people in the cast were like, ‘Oh my God, I watch ‘Bridgerton.’ What’s happening in Season 2?’ And I’d sit there and be like… So that was my experience — post-call experience.”

Charithra, who plays Edwina Sharma, added, “For me, the process of getting cast was such a long one that, like, when I finally got the call, it was kind of… humbling because I was in my mum’s allotment… gardening and covered in mud, and then I kind of get a call.”

She continued, “So it was just more of like a release, like, thank God it worked out finally. Like, before they can change their mind, let’s get rolling. So yeah, very different experiences, I think, but ended up in the same place.”

As for what to expect from Jonathan’s “complicated” character Anthony, he dished, “We get to go back in the flashbacks and see what happened to him as a younger man when he lost his father.”

He explained, “What’s brilliant about Bridgerton, I think as well, is they tap into within this sort of expansive sort of frothy, luxurious world… real human experiences that are drawn on, and one of those is loss and pain and grief. And that’s something that is so experienced, I think, with Anthony this year and his mother, and obviously with Kate and her past.”

Bailey went on, “That’s what I think connects them. So yeah, you know, you have to go to rake school, but also the one thing that I really wanted to get right as well as the amazing love story is just that sense of loss with Anthony. That’s something that’s going to underpin the whole love story.”

Is there a love triangle between Anthony, Kate, and Edwina? Chandran said, “It’s a complicated love triangle because it’s not a conventional one. Certainly on a show like ‘Bridgerton,’ you are not going to get catfights between women over men. That is just absolutely not the vibe. It’s sister before misters for sure.”

She noted, “What you get is three people that are interconnected with each other for totally different reasons, are drawn to each other in very different ways, and it’s that entanglement between the three of them, that sort of is the drama, I guess, of this season. And I think that, like, kind of, although it’s like a really crazy situation, each individual relationship is really relatable, I think, and you’d find it in your own life, probably.”

This season, the sex is toned down.

Jonathan emphasized, “You can keep your clothes on and still create the same amount [of passion]. I think that [is] the yearning that these two characters have for each other and the need they have to overcome is such a human thing and I think it’s incredibly sexy. To play opposite Simone, we had an amazing [chemistry] from the get go... It’s such an amazing partnership and to be able to play through looks…”

Simone chimed in, “Reading and the things that are unspoken, the tension leading up there, like, so gravitated towards each other bit by bit throughout the whole series and there wasn’t ever really a moment of like, for me anyway, ‘Thank goodness,’ or like, ‘I wish it was more like this.’ I was just so happy… It felt so right how their story goes. I wouldn’t have wanted it any other way.”

Bailey commented, “It’s so complicated and high stakes, and when they finally get together, because we know with romance, we know where it gets to, so how brilliant to play with the audience and take them on a different ride, knowing that there’s going to be at six other seasons and six other love stories.”

The show has inspired a new dating show called “The Courtship.”

Ashley reacted, saying, “How does one even understand that?”

While Jonathan hasn’t seen it yet, he noted, “What was so good about [Season] 1 is it came at a time where everyone needed that love story and the way that, you know, that rigid sort of set of courtship and gender roles in it, so sort of old-fashioned, and there’s a real sort of rose-tinted level of measure that’s put on it. But you know, it’s great and love is love and everyone wants to fall in love. So it makes sense. But I’d love to see it.”

Charithra quipped, “You can kind of understand the success of a TV show, but it’s, like, to have like a cultural zeitgeist on your hands is, like, another level.”