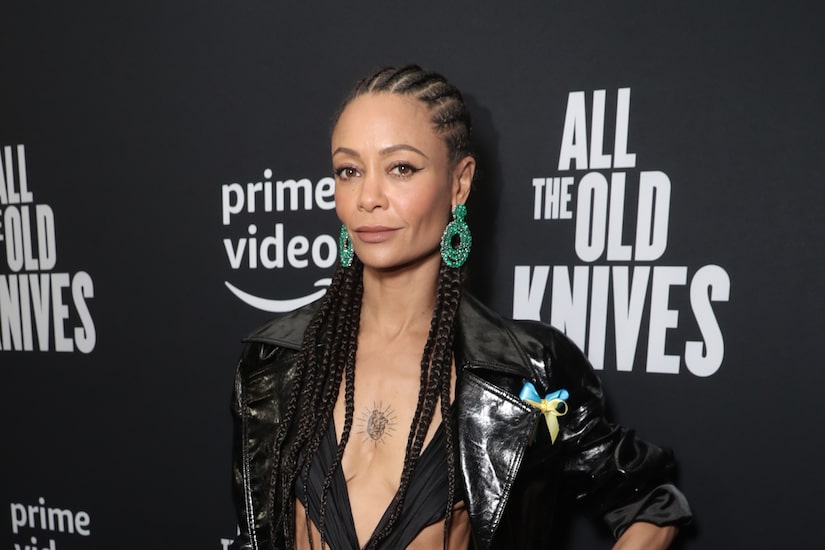 Actress Thandiwe Newton is doing it all as a working mom!

“Extra’s” Katie Krause spoke with Thandie at the premiere of her new film “All the Old Knives,” where she showed her support for Ukraine with a blue and yellow ribbon.

Amid the war between Russia and Ukraine, Thandiwe shared, “I just wanted to wordlessly acknowledge that, despite all of this, no one forgets.”

Newton called herself a “regular” person, explaining, “This is what a regular person is, if they just get to have had beautiful encounters with people. This industry, the arts, to be able to be a freak and be embraced in an industry which allows for our ideas to evolved continuously so we get to make mistakes and still be accepted.”

Thandiwe dished on her new romantic thriller “All the Old Knives,” in which she plays a CIA agent.

Of why the movie was made, Newton quipped, “We need more of them! We need them, especially in these times. We need to remember our humanity and our love and our fierce spirits.”

To prep for her role, she spoke to a “wonderful” CIA consultant, saying, “I shared a lot with her about my own insecurities and she shared a lot about hers, you know, being in the CIA as a woman of color.”

She noted, “It was actually really incredible witnessing two women from different industries who reached success and paying it forward in however we can.”

Thandiwe was “thrilled” to have the chance to learn more about CIA agents, who put their lives at risk daily and have to keep secrets from their families. She pointed out, “That’s seriously… that’s acting.”

In Newton’s opinion, she and co-star Chris Pine would be “really bad CIA operatives because we can’t lie.”