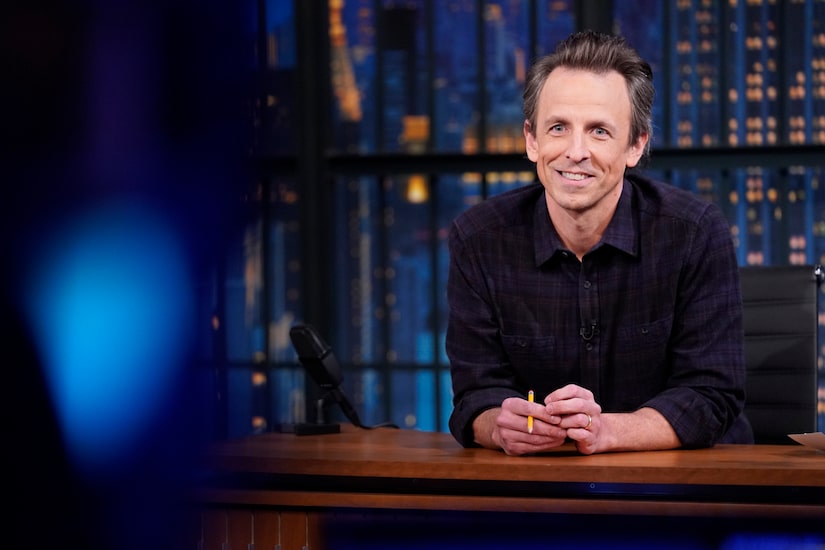 When asked how he came up with the idea for the book, Meyers said, “Current events was not the inspiration behind the book. When you have kids, first of all, as a parent, you experience fear like you never have before.”

Meyers wrote the book with characters who “felt differently about fear.”

Seth joked about being “heartbroken” that his kids won’t let him do voices when he’s reading the book to his kids. He commented, “I take it as a judgment on my acting skills.”

The book centers around a bear who is easily scared but has a rabbit as a friend who urges him to over his fears.

Is Seth a bear or rabbit in real life? He answered, “A bear married to a rabbit.”

Though his wife is a rabbit, he noted, “She is afraid of things you can’t see,” like germs!

Seth noted, “All my fears are visual things.”

As for how they dealt with the COVID-19, he said, “We reached a consensus on how to deal with everything.”

While the COVID-19 pandemic appears to be less of an issue nowadays, Seth is tackling other serious topics in the world with the help of his show “Late Night with Seth Meyers.”

He stressed, “We want it to be about what’s going on in the world, we want it to be cathartic… there’s an understanding that we are going to make jokes about it as we go… It’s a good time when it airs. Hopefully it’s the last thing you see before you go to bed… Hopefully see the world in a way that will help you sleep a little better.”

If Meyers had Ukraine president Volodymyr Zelensky on as a guest, what would he ask? He answered, “I would say, ‘When was the moment, you as a comedian, thought you could provide more value doing the job than being someone who made fun of the job?’”

Seth, however, could never see himself transitioning into politics from comedy. He explained, “I have so much respect for what we’re seeing in Ukraine, but I’ve always thought it’s such an impossible job.”

“No offense… We as Americans are impossible to govern,” Seth commented. “We have high demands.”

On a lighter note, Meyers revealed that his most entertaining guest on the show was Rihanna. He dished, “I was lucky to go day-drinking with Rihanna… everyone, who worked that day was blown away by her kindness and charisma, she was really fun.”