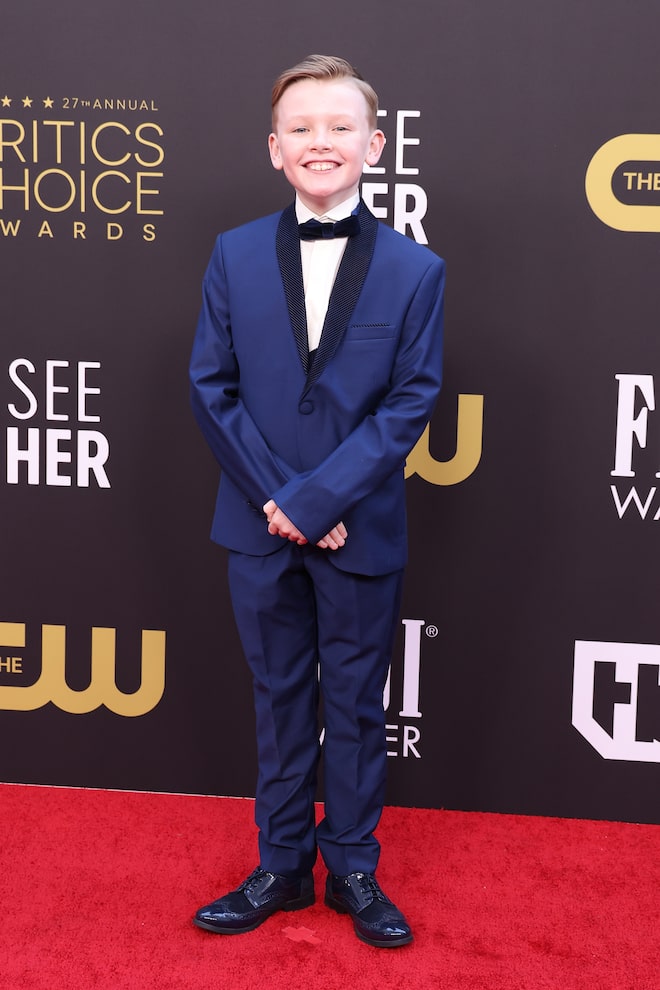 Before Jude Hill won Best Young Actor at the Critics Choice Awards for his role in Kenneth Branagh’s semi-autobiographical family drama “Belfast,” he hit the red carpet to chat up the stars with “Extra.”

When the 11-year-old Northern Irish star won the award, he was shocked, saying onstage in his acceptance speech, “I’m gonna be completely honest, I have nothing prepared.”

While manning the “Extra” microphone, however, he was more than prepared and the stars were happy to see him.

Jude caught up with his “Belfast” co-star Jamie Dornan before they picked up the Acting Ensemble Award.

Hill teased, “I’m going to be really, really hard on ya. What’s your favorite movie?” Jamie told him, “It’s probably ‘Anchorman.’” Jude confessed, “I don’t know that one.” Jamie told him, “You’re probably four to five years from being able to watch it.”

They shared a giggle when Jude asked if Jamie was being a “copycat” by wearing a blue shirt too, to which Jamie pointed out with a laugh, “Your shirt’s not blue. Jude insisted, “I don’t dress myself, my mom does,” joking she’s his “hairdresser, stylist, everything.”

Hill also wanted to know, “If you do win, are you going to give it to me?” Dornan told him, “Probably not, Jude, no… If we win the ensemble, you’re up there with me… If I win the individual… I’ll let you touch it when I get back to the table.”

Then there was a cute moment between Jude and Jared Leto after Hill gushed about Jared’s upcoming movie “Morbius.”

Jude told him, “I’m so excited for ‘Morbius,’” to which Jared replied, “You want to come to the premiere?”

Hill stunned him when he answered, “I don’t think I can.” Jared joked, “Unavailable! That’s what happens. I invite him to the premiere. He shut me down live on television!”

Jude then praised the “House of Gucci” star’s look, saying, “I wish I had my bow tie as big as that.”

Leto told him, “You know what?... You don’t need it big. It’s perfect. You match and you’re looking good. And you’ve got wonderful shoes on. Terrific.”

Meanwhile, “CODA’s” Marlee Matlin complimented him, saying, “I really enjoyed your work.” Jude told her, “That means a lot,” pointing out, “We’re matching.” Matlin told him, “Yes, we are matching. We should have come together… Maybe next time.”

Rita Moreno told him, “You were wonderful,” and when he tried to thank her, she said, “Don’t thank me… You were super in it. And it’s one of my favorite movies.”

Jude was excited to meet Lin Manuel Miranda and asked, “If there was ever a movie about your life, who would you like to have played you?”

Lin said, “That’s a great question… I would probably put John Leguizamo… I’d put him in a time machine to play me. He was my hero growing up. He was one of the only Latino guys I saw in Hollywood.”

Joel went on to joke, “And you’re working during your movie? They’re making you work. I’m sorry. You need a better agent. I got a couple over there. They’re weasels. Haha.”