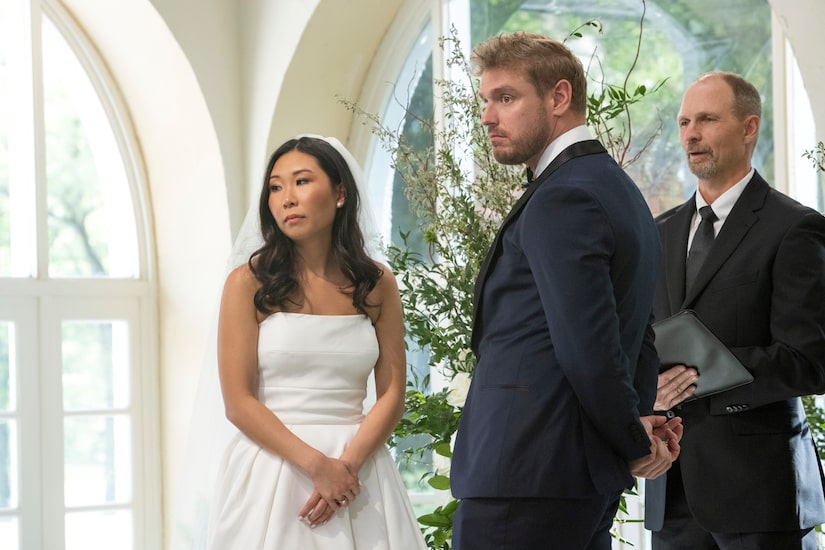 Natalie said she would have no hard feelings if those rumors were true. She commented, “I’m not with Shayne and he’s free to do whatever he wants.”

Lee also noted that she and Shaina “are cordial” when they run into each other at events or cast gatherings.

Hurley approached Jansen in one episode, calling his relationship with Natalie “fraud.” So, how did Natalie feel about that?

She admitted, “I was really surprised to see it. I was surprised to see, you know, kind of the anger in her in that scene… I actually didn’t know the extent of what she said… So seeing it was quite… a surprise for me, and I’m not sure, you know, where that anger came from.”

Natalie also revealed why she said no to Shayne at their wedding, saying, “It really stemmed from the fight that we had, you know, the night before our wedding.”

She admitted, “I think it was just a sign that we hadn’t resolved the communication issues that we had, and so it didn’t feel right to say yes on my wedding day. There was a lot of things that we had to work through.”

The show only aired a small part of what happened during their off-camera fight. Natalie commented, “It wasn’t just one thing. I think it was an accumulation of multiple things that have kind of built up. I think the pressure of the wedding also got to us a bit too. That led to, you know, pretty much a big fight… Looking back, it was needed at the time, right? I think we needed to experience that to come to the realization that we weren’t ready for marriage.”

Though they didn’t exchange vows, the two continued to date for “several months after the wedding,” but eventually broke up.

Lee explained, “I think ultimately we just realized we’re very different people with different wants and needs that we, you know, can’t fulfill for one another… We went through a period of not talking after that, but, you know, now we are good friends.”

As for what made them call it quits the second time, Natalie answered, “We had our communication styles [that] are very, very different and it led to a lot of misunderstandings. You know, we definitely loved each other a lot and we really, really wanted it to work, but, you know, like I said, we are very different people.”

While it’s “really hard” watching their love story unfold on the show, Natalie believed that it was “the healthiest decision for ourselves.”

Lee says she has “a lot of love” for Jansen, but she noted that she doesn’t have romantic feelings for him. She emphasized, “That door is closed right now.”

Of the possibility of a reconciliation, she commented, “I just kind of want to focus on myself and, you know, see if there’s another path for me... That’s kind of where I stand right now.”

When Katie noted that her DMs are probably going crazy with possible suitors since she’s “single,” Natalie quipped, “I haven’t seen any, but no, I don’t believe that.”

“Love Is Blind” Season 2 is now streaming on Netflix.