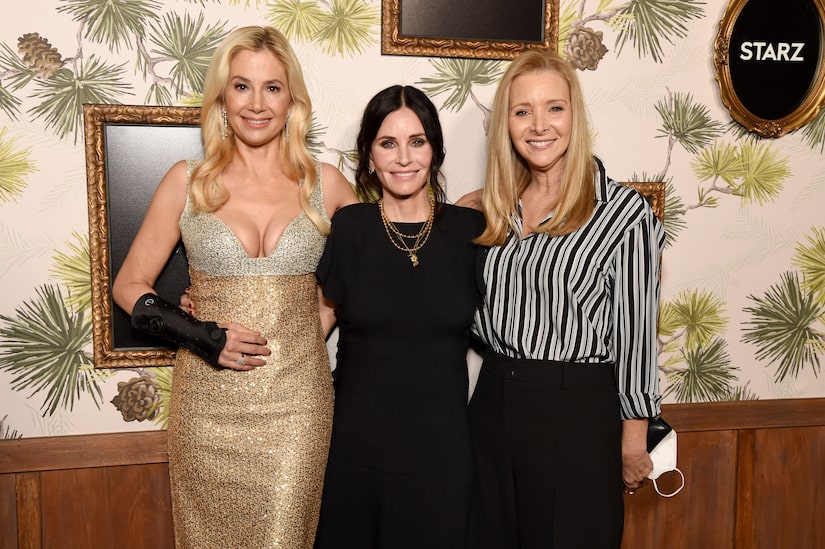 Last night, there were two reunions at the “Shining Vale” premiere… a “Friends” reunion with Courteney Cox and Lisa Kudrow, and another when Kudrow reunited with Mira Sorvino after they pulled off that surprise “Romy and Michele” reunion at the 2022 SAG Awards.

“Extra’s” Katie Krause spoke to Courteney, who was happy to have Lisa there. She said, “It’s so sweet, so sweet. Let’s face it, we are not exactly near home… Mann Chinese Theatre is far, so it’s sweet when people come out and support.”

Courteney and Lisa worked on “Friends” for 10 seasons until it ended in 2004.

“Shining Vale” is a little bit comedy, a little bit horror, with Greg Kinnear co-starring as Courteney’s husband. In the show, the two are trying to save their marriage, but they move into a haunted house that’s home to a ghost played by Mira.

A “proud” Courteney was “very excited” for people to see the show. She admitted, “It definitely got me reinvigorated and thinking, ‘Gosh, I love acting so much.’ It’s been a while since I have done a show.”

Of her complex character, she dished, “She’s a mother of teenage daughters. She’s depressed. She’s also possessed and no one believes her, so it’s frustrating.”

Cox noted that sparring with Kinnear was “really fun.”

As for Mira, she is confident that people will love the “comedy-horror hybrid,” teasing, “It’s so juicy and fantastic.”

What else people are talking about? Her “Romy and Michele” reunion with Lisa at the SAG Awards, where they wore a blue and pink suit, respectively. She commented, “We kind of decided to coordinate outfits and it kind of kept snowballing.”

Did their reunion spark any conversation for an actual reboot? Mira commented, “For me, that’s always been a wish.”

She added, “People have a hunger for it and we’d love to do it.”