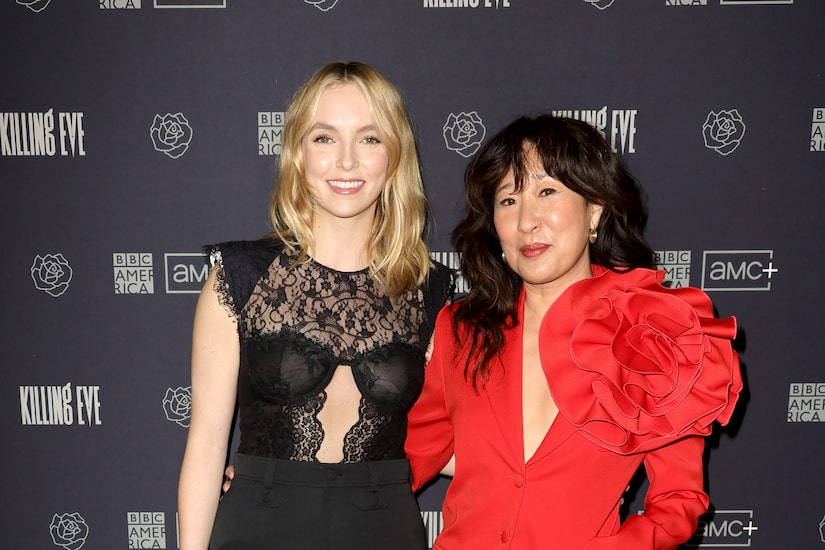 Sandra Oh and Jodie Comer are back for the fourth and final season of “Killing Eve”!

“Extra’s” Terri Seymour spoke with Sandra and Jodie, who dished on what to expect for Eve and Villanelle and revealed whether they’d reunite for a movie.

On the show, Sandra plays an MI-6 agent on assignment to track a psychopathic assassin, played by Jodie. The deadly cat-and-mouse game is further complicated by their characters’ mutual obsession.

The fourth season picks up with Villanelle on a quest to “better herself, to be good.” Jodie went on, “I think with Villanelle, you know, she feels that she is pretty good at most things, but for some reason, there’s this one thing she can’t do. She’s called a monster. People are constantly telling her she can’t change, that she’s bad, and I think she’s on this quest to challenge that and prove people wrong, but I think she’s trying to prove something to herself. Whether she has the ability to do that is another question that will transpire throughout the episodes, but she’s trying.”

Pointing out how much Eve has changed since Season 1, she elaborated, “I really wanted that change and I also wanted that space of time. You need time to develop these skills, and she’s taken the time to do it.”

Sandra admitted that it was “emotionally very, very challenging” to let go of her character after four seasons.

Due to the COVID-19 pandemic, Sandra and Jodie had a break from their characters for a year. Jodie commented, “There was definitely a moment when we came back for Season 4, like the first week, I was like, ‘Okay, this is gonna take me a minute just to get back into the mentality,’ because there is an energy about her.”

Jodie also revealed how her character has helped her in real life, saying, “She almost helped me shed a skin. There was something very liberating about playing her because she doesn’t really care about consequence, and that’s very freeing… I think that’s filtered through into my own life.”

As for why the show is ending after four seasons, Sandra referenced Eve and Villanelle, saying, “I was just the right time to explore the end of this relationship. It’s actually a very tricky dynamic to continue on for multiple seasons, and so that has always been a challenge after the first season to sustain truthfully and sustain how they’re gonna grow… It just felt in our bones that this was the right time to bring them to a new place of growth, but it was time to close it.”

Would they consider being part of a movie version of the show? Sandra answered, “I don’t know, because for me, when I close something, I close it… For me, just how I work, I do and I don’t really need to go back.”

The duo only “hopes” that fans are satisfied with the series finale!