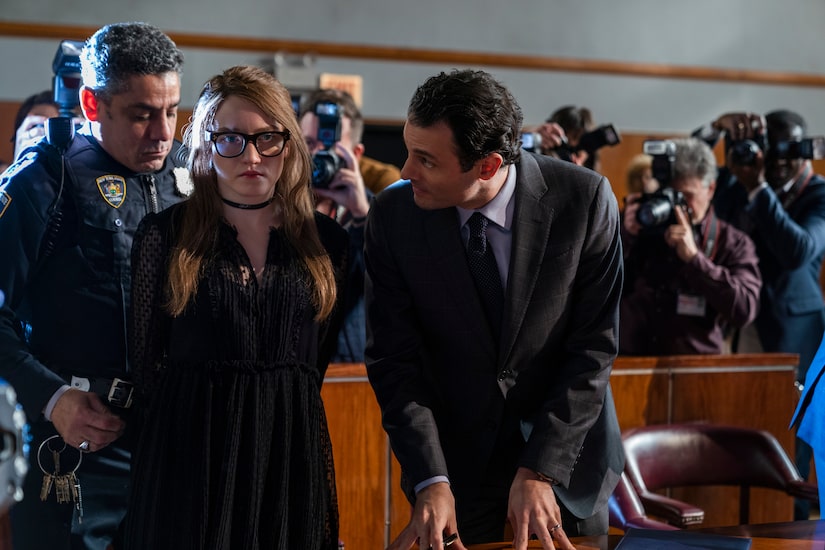 Julia Garner and more stars of “Inventing Anna” — in which Julia plays con artist heiress Anna Delvey — are sharing their reactions to news that the subject of the Netflix series doesn’t intend to watch it.

“It’s up to Anna,” Julia told “Extra’s” Katie Krause. “I totally respect that and I never, you know, I didn’t go into the show anticipating that she was going to watch the show, to be honest.”

She added, “Anna remains a mystery to all of us. We think we know her, but there is more to the story. I do know that she will do what she feels right and she will not be pressured to do otherwise.”

Arian Moayed, who plays Anna’s lawyer Todd Spodek, tried put himself in Anna’s shoes. “I have a hard time watching myself on-screen,” he admitted. “I can imagine that she would be like, ‘You know what? I’d rather pass on this.’ But deep down, I think she will watch it.”

“I think she’ll watch it and dissect it in a very minute way,” Arian went on. “As we’ve been saying, this is one part of Anna Delvey. She is young. We have a long career and story of Anna Delvey that we still need to unveil.”

Anna, who was born Anna Sorokin, recently sat down for an video interview with Cosmopolitan, even watching some scenes of “Inventing Anna.” She admitted to the outlet, “This will override reality. It’s weird to watch your own life owned by somebody else. It’s a good exercise in letting go.”

Delvey, who was convicted of swindling money from New York’s elite and was released from prison in February after serving just under four years, sold her life rights to the show’s creators for $320,000. The team behind the series also got some help from her friends and associates, who were paid consultants.

She commented, “It’s like lots of people in your life telling you what they think of you, all at the same time. Turns out, most of the time we don’t want to know what people really think of us.”

Before watching scenes from the pilot, Anna had only seen the trailer. Her reaction? She said, “Am I that insufferable?” She laughed, joking, “I don’t feel like I could ever be friends with myself.”

Anna did agree to meet Julia. Of their meeting, Julia told “Extra” that she “wanted to get [Anna’s] energy.”

Without being too pushy with the “private” Anna, Julia elaborated, “I was going to ask questions, but I kind of expected that I wasn’t going to get certain answers. I just wanted to get her spirit. What I came back with was how bubbly and likable and how charming she is.”

Before their meeting, Julia had done her research to nail the accent, watching interviews with Anna to get into character. She shared, “I got, like, access to very personal interviews,” which Julia says aren’t available to the public.

At their meeting, Anna asked to hear Julia do her accent, which she said was “extremely intimidating.”

Julia commented, “I started mirroring her… and she, you know, thought it was funny.”

Calling it an “out-of-body experience,” she admitted, “It was definitely one of the most bizarre things I’ve ever encountered in my life.”