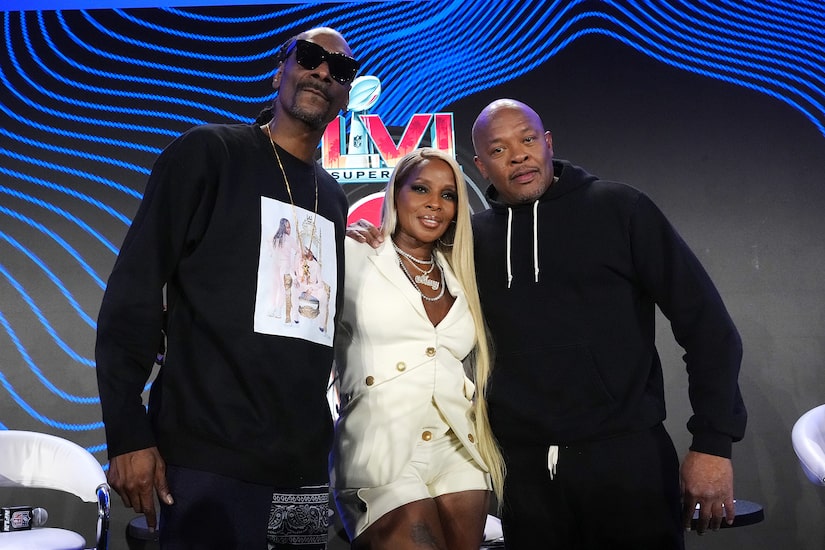 Before they hit the stage for the Super Bowl LVI Pepsi Halftime Show in Los Angeles, Dr. Dre, Snoop Dogg, and Mary J. Blige dished on what to expect in a press conference hosted by Nate Burleson and MJ Acosta-Ruiz.

When asked how they prep for one of the biggest performances of their careers, Mary said, “Rest, train, stay quiet, stay out of trouble.”

Without saying exactly what, Dre joked, “We know what Snoop does.”

Snoop quipped, “Yes, I hired a professional trainer. My cardio is definitely on point.”

As for how their rehearsal went, Dre answered, “The rehearsal was, you know, surprisingly fantastic.” He added, “It let us know, ‘Okay, we’re on to something special.”

Dre praised Mary, saying, “I had the chance to sit back and watch her set and it gave me goosebumps.”

Will there be any surprises during the halftime show? Dre didn’t reveal too much, but said, “Yes, but I’m not talking about it.”

Super Bowl LVI Pepsi Halftime Show will be headlined by hip-hop heavyweights Dr. Dre, Snoop, Mary, Eminem, and Kendrick Lamar. Dre stressed, “This should’ve happened a long time ago. Hip-hop is the biggest genre of music on the planet right now, so it’s crazy that it took all of this time for us to be recognized. I think we’re going to go on and do a fantastic show and we’re going to do it so big that they can’t deny us any more in the future.

“I’m not trying to be egotistical or anything like that, but who else could do this show here in L.A.? Who else could perform the halftime show other than these amazing artists that we put together for this thing?” Dre pointed out. “And not only that, I’ve been manifesting the Rams since the beginning of the season. I’m just thinking about it every day, I’m meditating on it, I’m like, ‘OK, it’ll be perfect if we’re in the Super Bowl performing at halftime and the Rams are in the game as well.”

He added, “For us to have the opportunity to bring the two worlds together — we got the queen of R&B, we got the king of hip-hop, we got all of his proteges in the place — this is what it’s about. This is what hip-hop and what the NFL is supposed to be about; representing change and moving forward.”

Dre hyped up the highly anticipated show, saying, “We want to make sure that everybody knows this is the best halftime show ever. I know we’re going to kill this sh-t.”