Taylor Lautner is dishing on wedding plans, his new movie “Home Team,” and the resurgence of “Twilight” in a new interview with “Extra’s” Katie Krause.

Taylor, who was joined by “Home Team” co-star Kevin James, proposed to girlfriend Taylor Dome back in November, but they haven’t started wedding planning just yet.

He gushed, “I will be involved because I am so excited, but we haven’t started yet… We’re taking time… to just enjoy this moment because we're both super excited about it.”

Katie asked, “How did you know she was the one?” Lautner teased, “We have the same name — it’s pretty simple.” Smiling, he added, “Yeah, a lot of our friends just call us like girl Tay and boy Tay, or she's Tay and I’m Taylor.” He went on, “How I knew, it was just like, she's the best person… She's just, she's my best friend… I strive to be more like her every day, and that's how I knew.”

For now, Taylor’s busy getting the word out on his new movie. In “Home Team,” Kevin plays New Orleans Saints coach Sean Payton, who reportedly stepped away from his role as head coach today. Payton was suspended in 2012 because of the “Bountygate” scandal. During his suspension, he worked as the offensive coordinator for his son’s middle school football team. Taylor plays the middle school team’s coach Troy Lambert.

Lautner revealed his longtime connection with Payton, telling Krause, “I met Sean when I was filming the final two ‘Twilight’ movies in Baton Rouge and he invited me to a home game and then we became friends. I just started going back for all of the home games. He was visiting me on the set of ‘Ridiculous Six’ with his daughter and his daughter ended up meeting Chris Titone, [Adam] Sandler's brother-in-law and they've been together ever since. Then, Chris wrote [‘Home Team’] about Megan's father.”

He added, “So it was it's pretty cool for me as a friend of Sean's, as a diehard Saints fan, to be part of this project.”

Kevin spent time with Payton as well, sharing, “He's a great guy and it was important for him to get it right and in a lot of ways… We don't want to make him look too good in this way or that way. Like he was, he's very humble, great, great coach, great father and a great friend and he's a really good guy. He really was amazing and it was cool to watch how he did this, you know, I always love watching successful people, a guy who could win the Super Bowl.”

Katie also had to ask how Taylor was feeling about the resurgence of “Twilight,” now that the films are on Netflix.

He said, “It definitely feels full circle and it’s like sort of nostalgic… A lot of it was like ‘Twi’ mom attention the last like few years and now all of a sudden we're getting like the teenagers again because they're just starting to see it for the first time… It reminds me a little bit of what it was like a decade ago." Katie quipped, "'Twilight' mania." 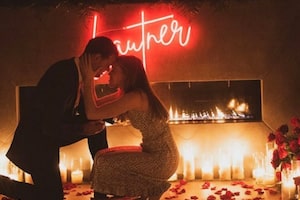 Taylor Lautner Pops the Question to Tay Dome: 'All of My Wishes Came True' 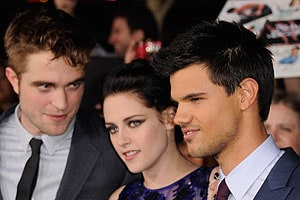 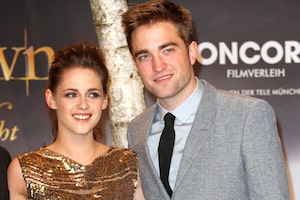