5 Seconds of Summer’s Michael Clifford has been secretly married for a year!

The pair wed in an intimate gathering with their wedding party at their home, where guests ate a “mix of Southern food mixed with some Australian food.”

Some of the guests to attend include Clifford’s bandmates like Luke Hemmings, Calum Hood and Ashton Irwin.

The pair were serenaded by Hemmings and his fiancée Sierra Deaton, who performed a rendition of “Can’t Help Falling in Love.” 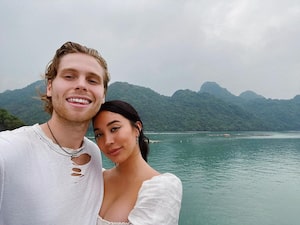 The couple shared, “We were most excited to be near our friends all together for the first time in a while due to COVID. To be officially married, even in secret, was so special for us too — officially Mr. and Mrs."

While they are already husband and wife, the two plan to hold an official wedding ceremony, like wedding vows, for a later date. Crystal explained, “I really wanted to save all of the traditional special wedding moments for our actual ceremony so I'm able to enjoy them with my mom. We're actually both only children, so we want to make sure all of our parents get to experience every aspect of our wedding since they only get to do it once! No pressure."

They were originally scheduled to get married in Bali, but were forced to postpone due to COVID-19.

Michael popped the question to Crystal two years ago.