Travis Barker’s photo of a baby bottle has everyone talking!

The musician, who recently got engaged to Kourtney Kardashian, shared a pic on Instagram Stories while watching “How the Grinch Stole Christmas”… and eagle-eyed fans noticed a baby bottle of milk in the photo. Check it out here!

Could the bottle belong to Kourtney’s sister Kylie Jenner? Kylie is currently expecting her second child with Travis Scott.

According to PageSix, one user commented, “Kylie HAD TO HAVE HAD HER BABY,” while another pointed out, “Kylie used those exact bottles when Stormi was little.”

One fan insisted it could be for a pet, writing, “Could be for the kitten we saw on Kylie’s post or the bunnies that [Travis’] daughter has. Idk, my kid bottle feeds his small animals for fun.”

As for now, the bottle still remains a mystery. 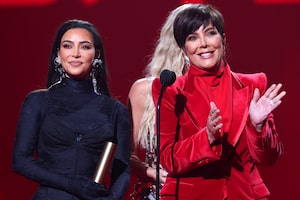 Wow! The Lavish Christmas Gift Kris Jenner Bought for All Her Kids