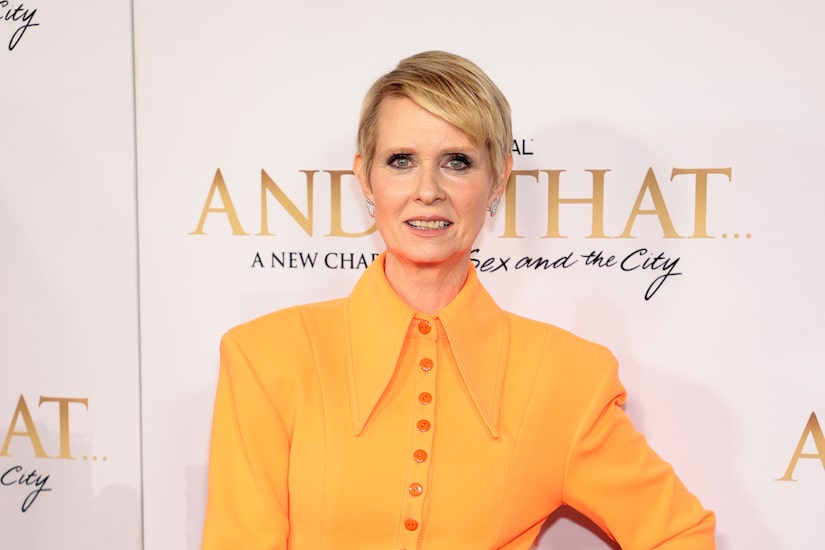 Nixon discussed how the show handled Samantha’s story line with the absence of Kim Cattrall. She said, “I think Kim could not have been more clear… that she’s done with Samantha, and of course, we respect that. We respect Samantha herself, the fictional character, and so I think we wanted her to be in some way an offstage part of the show.”

On the show, Nixon’s character Miranda is sporting gray hair instead of her trademark red mane. Cynthia weighed in, saying, “I feel like what we’re trying to do with all these characters is take everything that’s rock-solid foundation… and just knock it out from under them. The most identifiable thing about [Miranda] is her red hair. Let’s take it away from her, you know? So many women during the pandemic couldn’t get to the beauty parlor and let themselves go gray and then discovered they liked it. Miranda’s one of those.”

Cynthia also dished on what’s to come with Miranda and Steve on the show, saying, “They seem like a very reliable old married couple, but if you think back on Miranda and Steve, they’ve been through a lot of hills and valleys and a lot of drama.”

She pointed out, “We didn’t do this show just to see people staying where they were… We want all these characters to be put through their paces and be challenged.”

Nixon shared her reaction to Mr. Big’s death on the show. She said, “We didn’t do the show to just rehash the same situations and to just let these characters tread water. We did this to plop these characters down in 2021 and see what they’re doing and see how they’re grappling with a new world order.”

She pointed out, “It felt real to me because life can change just like that.”

Will there be a Season 2? Cynthia answered, “I hope there would be more. I think that the show that has emerged is really inventive. [It] has so much of what was great about ‘Sex and the City,’ but it’s also expanded… It just is adding so many dimensions to the show and leading us into so many great new territories.”

She emphasized, “I hope we’re back to stay for a little bit.”

“And Just Like That…” is streaming on HBO Max.