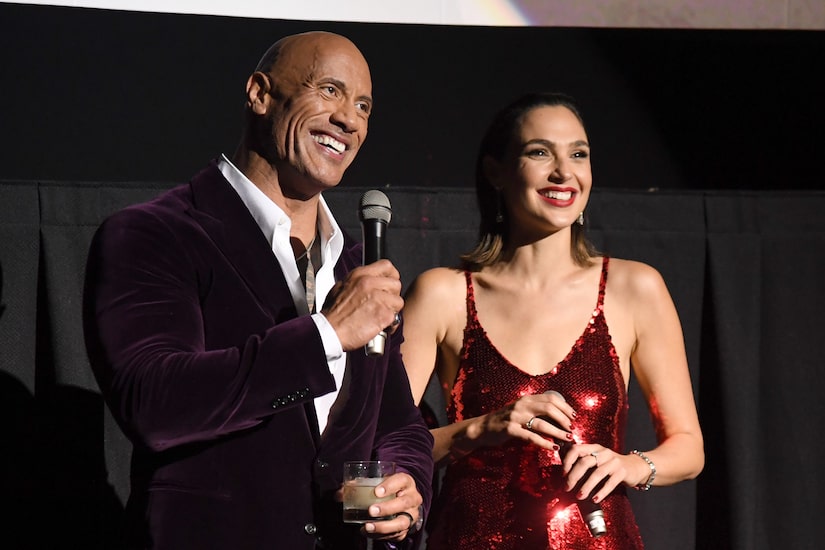 Since they worked together on the movie, have their daughters met? Gal revealed, “They have a virtual relationship during the pandemic.”

Johnson noted his daughters are fans of Gal, who they know plays Wonder Woman. He said, “They love Gal… She sent me a video talking to them… They always want to see that video and the one that Santa Claus made them.”

When asked about her daughters appearing in the next “Wonder Woman” movie, Gal quipped, “We’re gonna bring DJ’s daughters, my daughters, and Ryan’s daughters to do a cameo for ‘Wonder Woman 3.’ I think that is a cool idea, and I need to make sure it happens.”

As for her upcoming role as the Evil Queen in the live adaptation of “Snow White,” Gal pointed out that her role as The Bishop in “Red Notice” made her want to do more villainous roles. She said, “I just enjoyed far too much playing The Bishop, so I was looking for my next villainous character, so the Evil Queen is the one.”

Gadot noted that it was “delightful” to go from a super hero role in “Wonder Woman” to playing the villain in “Red Notice.”

Gal raved about her role, saying, “She is so fun and villainy and cheeky… I loved playing her.”

Dwayne chimed in, saying, “I think she created a villain that you loved to hate. That’s not easy to do.”

The pair also opened up about the challenges of working during the pandemic. Johnson admitted, “It was a challenge for all of us. We give a lot of credit to the crew who had to come on and isolate and commit to making the movie.” He added, ‘We do what we gotta do. We adjust, we pivot to the pandemic.”

“Red Notice” is in theaters now.