Anya Taylor-Joy is having a fashion moment. The star was on the red carpet Monday for the premiere of her new thriller “Last Night In Soho,” looking amazing in Dior — of course — as she talked to “Extra’s” Rachel Lindsay.

Anya wore Dior at the Golden Globes, Emmys, and Critics Choice Awards, and is now an ambassador for the brand. Rachel had to ask what has been her favorite look, and Joy told her, “Oh, gosh, I would say it's a combo of this one and the one I wore to the Emmys because they were gracious enough to make the dress of my dreams.”

“Last Night In Soho” is an eerie new film about a lounge singer in the ‘60s who may have been the victim of a horrible crime. Anya plays the lounge singer Sandie, and is getting accolades for her voice. She told Rachel she enjoyed the singing role, saying, “Absolutely. I had the best time.”

In the movie, Thomasin McKenzie’s character Eloise is an aspiring fashion designer who is mysteriously able to go back to the 1960s, where she encounters Sandie.  Anya shared what she loved most about the story, saying, "I loved the commentary that it was making in terms of female friendships, in terms of female obsession.”

She also loved the ‘60s fashions! What was her favorite look?  “I would say the white PVC coat with the white boots. I bought a pair of white knee-high boots after being Sandie and I have not taken them off. I love them so much.” 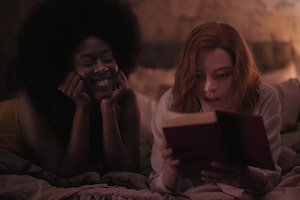 Anya Taylor-Joy Talks Living Her Best Life During COVID-19, Plus: Her Film ‘Emma’