“Succession” fans, get ready! Only two more days till the show is back, with Brian Cox as raging, F-bombing media mogul Logan Roy.

The father-son war over the family empire is about to get brutal, as Logan’s son Kendall tries to take him down.

“Extra’s” Billy Bush caught up with Cox, who talked about what’s in store, a Murdoch family member who watches the show, and a job he once had at a gym.

Bush said, “Here’s the thing about ‘Succession’: Season 3 is upon us. Season 1, a smash, Season 2, so much on the line… it delivered just as big… That leads to Season 3. Can it possibly be as good as the first two? How would you describe it?”

Cox replied, “I think there’s just a momentum going on, and I don’t think you can stop the momentum, the momentum of dissatisfied children and getting their father… and the elements of betrayal, which are constantly in the ether.”

Production of Season 3 was delayed because of the pandemic, and Brian shared, “I think what we’ve done is the momentum is doubled even because of the time… It’s just incredible writing.”

Billy brought up that “Succession” is loosely based on the Murdoch family, asking if Brian has ever met Rupert Murdoch.

Cox shared, “No, I never met Rupert Murdoch, but we did have this incident… I was in my local Primrose Hill café ordering a latte, and I hear this voice behind me… ‘Hi, We're watching the show we're liking it really… It's difficult, but it's interesting… It's a little hard for my wife — she has qualms.’ I said, ‘Why does your wife?’ He says, ‘My wife is Elisabeth Murdoch.’”

Elisabeth Murdoch, who is married to Keith Tyson, is Rupert’s daughter.

Meanwhile, Brian, 75, said he is not sure if he could ever do anything besides acting, saying, “I don’t know, because this has always been who I am and who I’ve been.”

Billy asked, “What’s the worst job you’ve had along the way?”

Cox shared, “There was a time I got sick of everything and I went to work in a gym. I had to do bookings on the front desk at a gym, and people would come in and book these bikini waxes… You’d get these Swedish women coming in… ‘Can I get a full bikini wax?’ and then they would say, ‘Excuse me have you ever been to my parties?... I think I’ve seen you at some of my parties.’” Brian said he would answer, “‘I’m sorry, madame, I don’t think I’ve ever been.’” And they would say, “Do you think you would like to come to one of my parties?” 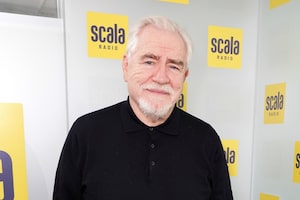