Adele’s highly anticipated single “Easy on Me” has just dropped!

On Thursday, Adele released the music video, which starts off black-and-white before it turns into full color.

She opened up to Radio 1's Greg James about the single, which includes lyrics like, “There ain’t no gold in this river / that I’ve been washing my hands in forever. I know there is hope in these waters / but I can’t bring myself to swim when I am drowning in this silence, baby / Let me in.”

Adele told James, "I wrote for the album in 2019… I was making decisions in my life which have been well-documented over the last few years," she said, likely referencing her divorce from Simon Konecki.

"You can initiate something and then go, ‘Hang on a minute, go easy on me.’ Like bear with me while I try to find my feet in a situation. There is something that is hopeful about it and also sad. I obviously bawled my eyes out when I was writing it and when I was singing it for the recording. There is an element of hope in it that gave me hope because I was at my wit's end in the beginning of 2019."

The video reunited Adele with Xavier Dolan, who also directed her music video for the smash hit “Hello” in 2015.

Dolan said, “I was honestly hoping for this to happen. For me, there’s nothing stronger than artists reconnecting after years apart. I’ve changed. Adele’s changed. And this is an opportunity to celebrate how we’ve both evolved, and how we’ve also both remained faithful to our dearest themes. It’s all the same, but different.”

“Easy on Me” was shot in the same Quebec house that was used for “Hello.”

In a recent interview with Vogue, Adele also opened up about the song, saying, “It’s not like anyone’s having a go at me, but it’s like, I left the marriage. Be kind to me as well.”

She added, “It was the first song I wrote for the album and then I didn’t write anything else for six months after because I was like, ‘OK, well, I’ve said it all.’” 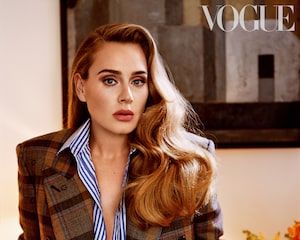 “Easy on Me” is the first single from her upcoming album “30,” which drops November 19.

Earlier this week, Adele shared about the new album, “I was certainly nowhere near where I’d hoped to be when I first started it nearly three years ago. Quite the opposite, actually. I rely on routine and consistency to feel safe. I always have. And yet there I was knowingly — willingly even — throwing myself into a maze of absolute mess and inner turmoil!”

She went on, “I’ve learned a lot of blistering truths about myself along the way. I’ve shed many layers but also wrapped myself in new ones. Discovered genuinely useful and wholesome mentalities to lead with, and I feel like I’ve finally found my feeling again. I’d go so far as to say that I’ve never felt more peaceful in my life... I’ve painstakingly rebuilt my house and my heart since then, and this album narrates it.”