Over the weekend, Bones tied the knot with Caitlin Parker at their Nashville home.

Bones told People magazine, “We love home. We picked this place out together — that was really one of the first decisions that we made as a couple. And so she thought, 'What if we got married here?'”

For her big day, Parker wore a Galia Lahav gown. She revealed, “It was probably the third dress that I tried on, and I knew it immediately. I had five girls [including bridesmaids Abby Smyers and ‘The Bobby Bones Show’s’ Amy Brown] with me and three of them started crying! It was the absolute opposite of what I thought that I wanted from the start — completely different.”

Some of big names to attend include Dierks Bentley, Jake Owen, Chuck Wicks and Charlamagne The Good. Dan + Shay performed the Beach Boys song “Forever” for the couple’s first dance.

The wedding comes nearly a year after he proposed. He admitted, “When she finally agreed to move here, I just knew I was going to propose. I knew immediately that it was extremely different, even from the start. Early on, it was like, 'I really needed to treat this delicately and invest my time and my capabilities because this is going to be for a long time.' I wasn't freaked out and that's how I knew it was right. I never once went, 'Oh God, what's happening here?' Mostly I was like, 'Maybe this is what people are talking about when you watch movies and read books.' That's how I knew she was the one — because I wasn't freaking out." 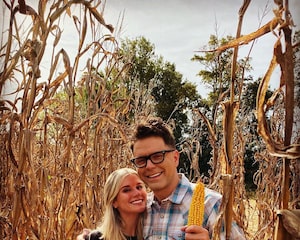 Do they have kids on their mind? He said, “We want kids. I never really had a family growing up. It's also a growing process for me to be a better, more well-rounded human. I'm looking forward to that."

Caitlin added, “My family is really big on traditions. Christmas Eve, we do the same thing every year, and we always go on a family vacation. I really look forward to continuing some of those with him, but also starting our own."