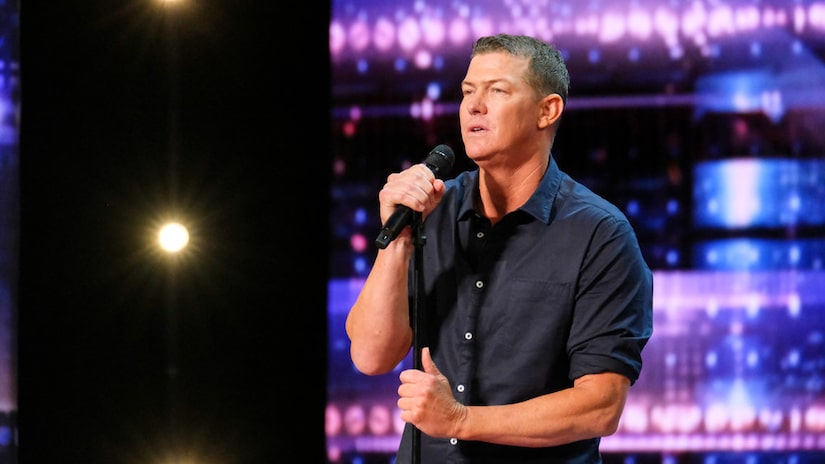 Matt Mauser blew the judges away last night on “America’s Got Talent” with an emotional vocal performance more than a year after losing his wife Christina Mauser in the same helicopter crash that killed Kobe Bryant.

“Extra’s” Nate Burleson spoke with Matt, who opened up about his experience on “AGT,” admitting, “It’s a little overwhelming. It was a lot to take in… [but I] feel real good about it.”

Matt credits his experience as a swimmer with helping him cope with stress. He explained, “[I] always like to give swimming a huge amount of credit for as I move through life… I remember jumping in the pool… Having that anxiety and having to calm yourself, it’s very similar.”

He added that his performance was “rewarding, but peppered with sadness. I wish my wife was there… I am concerned with showing my kids that life goes on… That’s why I am there.”

Matt told his heartbreaking story and sang a tearful rendition of Phil Collins’ ’80s ballad “Against All Odds” as his three children looked on.

He said he felt his late wife’s presence while he sang, sharing, “The part where you let things in is in the end [of the song]. At the end, I felt her… and it manifested itself in a couple tears.”

His late wife Christina “was the most influential person in my life and that doesn’t stop just because she is not there physically,” he said. “Her voice is my conscience.”

He also revealed the significance behind his song choice. “There’s a line in there with so much relevance to me,” he said. “‘You’re the only one that really knew me at all,’ and that’s just so true… When you give your heart to somebody and you dedicate your life to somebody… that person becomes a sounding board. Your person becomes your other half, and when you lose that... That song just had such significance lyrically that I felt it would be appropriate.”

Had Christine been there, Matt shared, “She would have said, ‘We need to get these kids home. They are tired.’”

Their eldest daughter was actually supposed to be on the helicopter that fateful day, he said. He recalled, “We wrote a song together called ‘Green Bike’…and she was going to perform it with me. I had a show, and she was feeling sick the week before and she was supposed to be going up to play in the tournament and I told my wife, ‘Hey, she’s got to sing tonight. She’s not feeling well. Let’s keep her home.’

If he wins “AGT,” Matt said, “I would dedicate 100 percent of the winnings to my wife’s foundation.”

He said, “This is trying something new and taking an opportunity and making the most of it and seeing where life takes you and not being afraid to take risks.”