Daly had a front-row seat to the proceedings since he was their officiant. He shared on “Today” on Tuesday morning, “It was incredible to be part of such an important moment in their lives. The best way to describe it is it was perfectly them — the whole weekend and the marriage itself. It was as elegant and refined and cool as Gwen is, and it was as country and down-home and fun as Blake is.”

Carson described the ceremony as “a perfect blend of country and glamour.”

“They're like if you pair delicious fried chicken with a glass of champagne,” Daly said. “On paper and on the menu it doesn't seem to work, but it works. It's comfort food with class. And everybody roots for that.”

While he didn’t want to divulge too much, Carson revealed that Gwen and Blake wrote their own vows. Blake actually sang his own vows, bringing many of their guests to tears!

Carson noted that he had been working with the couple for months to make sure the wedding went as they imagined.

Gwen wore a Vera Wang gown while Blake sported jeans with his tuxedo. Their wedding was captured by photographer Jeremy Bustos.

A source told Us Weekly, "Her dad walked her down the aisle and the boys were included in the ceremony. They were recognized as being a family of five."

Last week, Blake and Gwen had everyone on wedding watch after they applied for a marriage license in Oklahoma because by state law people have 10 days to marry from the day a license is filed.

In February, Blake told "Extra's" Cheslie Kryst that the wedding was on hold because of the pandemic.

“We want our families to be there, her mom and dad, my mom and stepdad, and we don’t have a clue when we’re going to be able to mingle again. So that is all we’re waiting on.” Smiling he added, “I would marry her when we’re done with this interview if I could.” 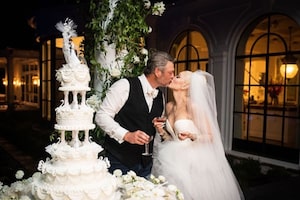 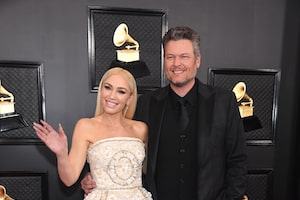 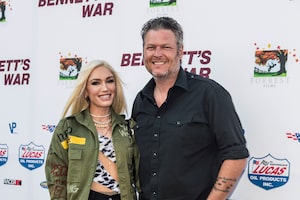