Less than a day after news broke about John Paragon’s passing at 66, more details about the cause of his death have been released.

According to the Riverside County Coroner, Paragon died from “cardiovascular disease with significant conditions of chronic alcohol abuse.”

Paragon was found deceased at his Palm Springs home in early April.

It was Paragon’s blue-painted face that would appear anytime Paul Reubens’ Pee-wee Herman character wished for something on "Pee-wee's Playhouse," which ran from 1986 to 1990. 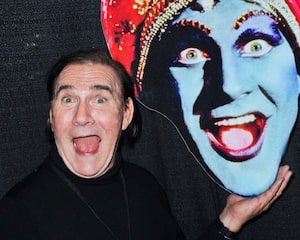 Paragon also voiced Pterri, a green pterodactyl, on the show.

He also played Cedric, one half of a bullying, armoire-stealing gay couple on three episodes of “Seinfeld” (1995 and 1998).

As a writer, Paragon was Emmy-nominated for his work on “Christmas at Pee-wee’s Playhouse.”