Actress and comedian Tiffany Haddish is ready for anything!

Dishing about her body transformation, Tiffany said, “You know what’s crazy is this outfit I wore to a premiere in New York for one of my movies, like, two years ago… back in 2019, and it is so loose right now.”

When Terri mentioned Tiffany’s latest bikini snap, she quipped, “Girl! I’m trying to get my high school body back. Look, look, look at all that. The skirt is too big! It used to be tight. Look how much I lost… I love my clothes are too big.”

Haddish has filled in for Ellen as a guest host, though. She said, “I got five things I would like to accomplish. First, once I accomplish those five things, then we could start talking about Tiffany working in daytime… And Ellen, she did ask me. She said she wanted some days off work. She’s like, ‘Would you guest host for me?’ I’m like, ‘Sure!’ I’m making a little money, I’m down to help, I’m down to learn.”

She dished, “It premieres June 18 on TBS. I’m super excited about it. It’s a show for the culture… It’s the show where we show Black movies. When I say Black movies, it’s Black movie stars in it… It’s a home kind of a setting, like what my ideal home would be. And I have celebrity guests come in.”

Haddish continued, “And I have musical acts performing, and we’re talking about whatever movie is on… And, like, we watched a movie and we paused the movie, and we talked about it. Instead of a commercial playing, we pause and we talk about what we just saw.”

As far as her show’s guests, Tiffany played coy, teasing, “I can’t say who’s coming… What I can say is, a lot of people know who my friends are. And there’s a lot of people that owe me favors, okay, and I plan on using my favors.”

It’s unclear whether Tiffany’s boyfriend Common will be making an appearance, but she did reveal another secret project she is working on! She revealed, “I want to adopt… I want a variety pack of kids… a little rainbow tribe… Call them the Haddish bunch.”

She added, “And we’re gonna get them 5 and up to like 14, 13, because I would like for them to already know how to, you know, use the restroom, wash their own bodies, you know, put food in their own mouths… I can be like a guardian or a leader for them to show them the way.” 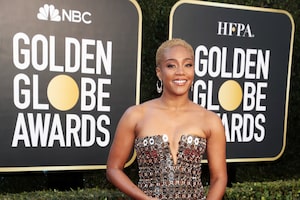 Tiffany Haddish’s Secret to a Fun Relationship with Common, Plus: Her Epic Response to Those Calling Her ‘Funny-Looking’ 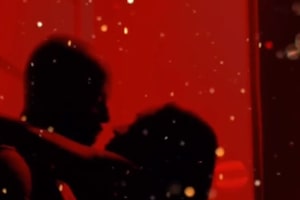