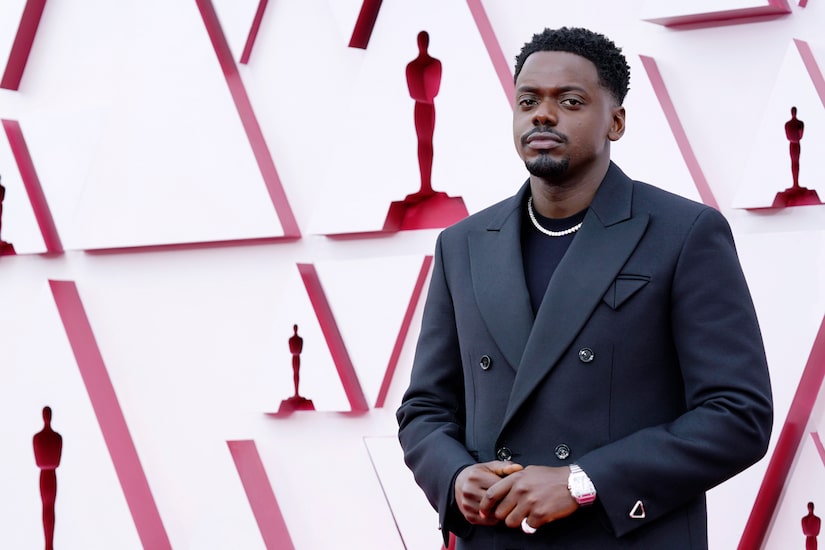 The 2021 Oscars are under way... and "Extra" is there giving you a running commentary:

8:15 p.m. Joaquin Phoenix is up to present Best Actor... and the award goes to Anthony Hopkins for "The Father." The acting legend is not present to accept.

Hopkins' win came as a surprise, as many predicted Chadwick Boseman would win a posthumous award for his role in "Ma Rainey's Black Bottom."

8:13 p.m. Renee Zellweger takes the stage to present Best Actress. The award goes to Frances McDormand for "Nomadland" She said, "I have no words, the voice is in my sword and we know the sword is our work and I like work."

8:08 p.m. "Nomadland" wins Best Picture! Frances McDormand asked that everyone watching please head to the theater as soon as it is safe to watch all of these films... and ended with a howl for "our wolf."

7:45 p.m. Lil Rel Howery is quizzing the audience on former Best Song nominees. He asked Andra Day about "Purple Rain," which turned out to not have any nominations and then to his former co-star Daniel Kaluuya asking about Donna Summer's "Last Dance," which actually did win an Academy Award.

He then turned to Glenn Close and had Quest Love play "Da Butt," and Glenn surprised everyone when she knew it... in fact she even danced to it! 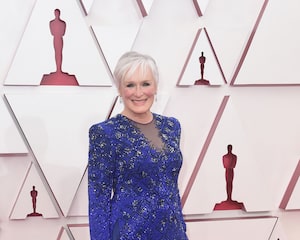 7:40 p.m. Next up is Best Original Song. The award goes to H.E.R. for "Fight for Us" from "Judas and the Black Messiah." She said, "Music is power, and as long as I'm standing I'm always going to fight for us."

7:34 p.m. Best Original Score goes to Jon Batiste, Trent Reznor and Atticus Ross for "Soul." Batiste points out that there are 12 notes per octave, the same 12 notes that they all have to work with. He later added, "i'm just thankful to God for those 12 notes."

7:26 p.m. Tyler Perry takes the stage to accept the Jean Hersholt Humanitarian Award, saying when he helps somebody "I'm not trying to do anything but meet somebody at their humanity."

He tells the story of a homeless woman who asked for shoes, and he took her into the wardrobe department at his studio and found her a pair. She told him she thought he would be upset that she asked, and he told her, how could he be upset if he used to be her.

Perry ended by saying he refuses to hate others, and hopes others will do the same.

7:23 p.m. Viola Davis introduces Jean Hersholt Humanitarian Award recipient Tyler Perry, listing off his many kind acts like paying for groceries, funerals and more. In the past year, he has worked to keep his cast and crews safe at Camp Quarantine, even helping them get the vaccine.

Tyler also opened up in a pre-recorded segment about how he was raised to "find a way" to help.

7:19 p.m. After Harrison Ford's hilarious introduction, "Sound of Metal's" Mikkel E.G. Nielsen nabbed Best Film Editing. He said of making the film," It has been like following a rainbow for me and today I felt like we found the gold."

7:04 p.m. Halle Berry, debuting a short new 'do, is up to present Best Production Design! The winner is "Mank"! And another win for "Mank"... Erik Messerschimdt just won Best Cinematography. He thanked David Fincher in his speech for "creating an environment where we can do our best work."

6:55 p.m. Brad Pitt is here! The A-lister is onsite to present Best Supporting Actress. And the Oscar goes to Youn Yuh-jung from "Minari." She is the first Korean actor to win an Academy Award!

She shared how pleased she was to meet Brad, and later praised her fellow nominees, including Glenn Close, and teased, "I'm luckier than you." She also had a little fun at her sons' expense, "This is the result because Mommy worked so hard."

Co-director James Reed added, "If a man can form a friendship with an octopus, it makes you wonder what else is possible."

6:37 p.m. "Colette" wins Documentary Short Subject! The movie is about a French resistance fighter, whose brother died at a concentration camp after being arrested.

Co-director Pete Docter said, "This film started as a love letter to jazz, but we had no idea how much jazz would teach us about life."

6:20 p.m. Reese Witherspoon presents Best Animated Short Film to "If Anything Happens I Love You"! 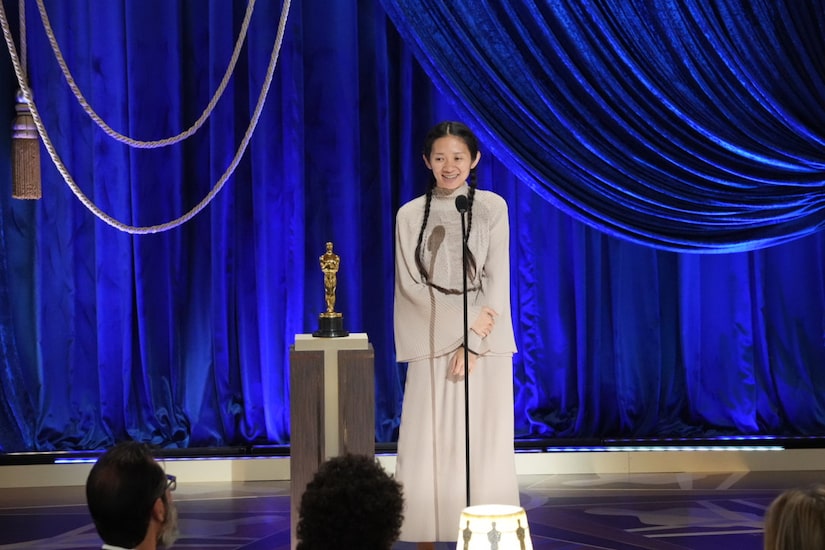 6:00 p.m. Chloe Zhao just made history! She is the first woman of color to win Best Director. The "Nomadland" filmmaker said, "What a crazy once in a lifetime journey." She then recalled playing a game with her father when she was a child that included the phrase: "People at birth are inherently good," she said that "had such a great impact on me when i was a kid," insisting that even when it seems like the opposite, always find good in the world."

5:45 p.m. Don Cheadle is up to present, and just handed out the Oscar for Best Makeup and Hairstyling to “Ma Rainey’s Black Bottom”! And it is another win for "Ma Rainey's" the movie just took home Best Costume Design! 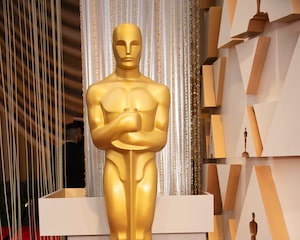 He said, "Thank you God, I can’t be here withoug your guidance and protection, thank you mom for pouring every thing into me… you gave me your factory settings… I share this honor with the git that is Lakeith Stanfield, Dominique Fishback, the incredible cast the incredible crew.

Daniel said of Fred Hampton, the man he portrayed, "What a man, how blessed we are to live in a lifetime where he existed, thank you for your life."

To the shock of his mom in the audience, he ended with, "My mom, my dad — they had sex. It's amazing I'm here."

5:25 p.m. Laura Dern then took the stage to present Best International Film. "Another Round" took the win with director Thomas Vinterberg accepting with an emotional story.

He revealed his daughter Ida had died in a car accident, saying, "We miss her, I love her… she loved this and she felt seen by this and she was suppose to be in this… Ida this is a miracle that just happened, and you are a part of this miracle, maybe you’ve been pulling some strings somewhere, but this one is for you."

5:20 p.m. Next, Best Adapted Screenplay went to Christopher Hampton and Florian Zeller for "The Father."

Florian gushed of star Anthony Hopkins, "I wrote the script for him, to me he is the greatest living actor… to work with him was the dream and I knew it was not an easy dream to fulfill… I thought until someone came to prove it was not possible, it was… thank you Anthony for having said yes to that script… it was the most amazing experience of my life."

5:15 p.m. Time to hand out the first award... the winner of Best Screenplay goes to Emerald Fennell for "Promising Young Woman."

She joked of the statue, "Omg, he’s so heavy, he’s so cold," she went on to joke about a speech she once wrote when she was 10, which paid homage to her fantasy husband Zack Morris from "Saved By the Bell"! 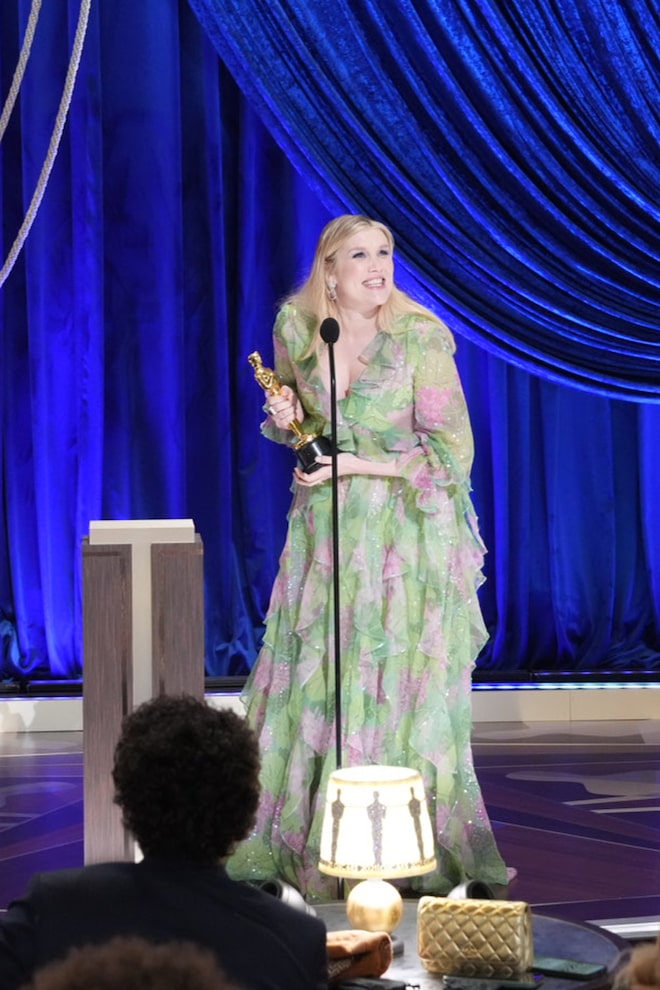 5:10 p.m. Standing before tiered tables of nominees, Regina says, "Welcome to the 93d Oscars. Oh Jesus, I made it – It has ben quite a year and we are still smack dab in the middle of it. We are still mourning… if things had gone differently in Minnesota I would have traded in my heels for marching boots," she said referring to the Derek Chauvin murder trial. "I know the fear that so many live with and no amount of fame or fortune changes that."

She then changed the subject, saying, "Tonight we are hear to celebrate… our love of movies helped us get through."

5:00 p.m. The Oscars is underway! The show starts with a camera following Regina King, wearing a long blue gown, through L.A.'s Union Station. The star carries an Oscar as she walks by statuettes and makes her way to a stage. 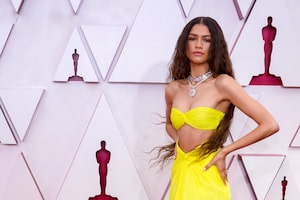 Every Fashion Moment from the 2021 Oscars