On Tuesday, fans speculated that Wayne had tied the knot with his on-again, off-again girlfriend Denise Bidot after he tweeted, “Happiest man alive! Today is the beginning of our forever. Forever?? Forever, ever?? FOREVER EVER!!!!! The Carters.”

In response to the rumors, his rep told Page Six, “We have no confirmation of that as of yet.”

Last year, it was reported that Wayne and Bidot called it quits over his support of Donald Trump in the 2020 presidential race.

Hinting at the split, Wayne wrote, “I live the way I love and love the way I live. I’m a lover not a lighter bekuz they burn out. I am an eternal fire and burning love, either leave with a tan, a 3rd degree burn, or stay and die in love. You’re sweating. Sincerely, the fireman.”

It looks like they were able to work out their differences! 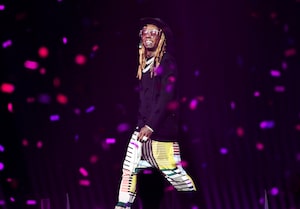 Last week, Wayne announced that they were back together with a video on his Instagram Story. The video featured Denise blowing kisses while sitting together, their names drawn nearby in the sand with a big heart around them.

Wayne was previously married to high school sweetheart Toya Johnson for two years, but they called it quits in 2006.