One year after getting engaged, “The Real Housewives of New York City” star Tinsley Mortimer and her fiancé Scott Kluth are calling it quits.

Scott told Us Weekly, “After fourteen months of engagement, Tinsley and I have ended our relationship, and we have been living independently for the last few months. This was an incredibly difficult decision, but it is one that I believe is best for both of us. I will always care about Tinsley, and I sincerely wish her happiness and success in all that she does in the future.”

“While I understand this news will be of interest to many, I ask for privacy and understanding during this time as I continue to work on recovering emotionally from the end of our relationship,” Kluth added.

While Tinsley hasn’t publicly commented on the split, a source told the outlet that it has been “devastating,” adding, “He completely blindsided her.”

In late 2019, Kluth popped the question to Mortimer, who then quit “The Real Housewives of New York City” to be with him in Chicago. At the time, a source shared with the outlet, “She is moving for love. This is a very happy time in her life right now, and everyone is rooting for her and Scott. They have addressed all their issues and no longer want to live without each other. She is very, very happy!”

The two have had a “complicated” relationship. They broke up more than once before their engagement. Back in 2018, they split, but a source claimed, “They've done this before, these little breaks. They are both super optimistic they will be able to work it out when their schedules aren't as crazy… They love each other so much.” 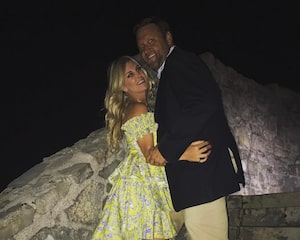 Tinsley and Scott were introduced by “RHONY” star Carole Radziwill on Season 9 of the Bravo show.