The star tweeted, “Happy to report that I am back home and continuing my recovery. I am so grateful for the outpouring of support and encouragement that I have received over the past few weeks.”

He explained, “Comminuted open fractures affecting both the upper and lower portions of the tibia and fibula bones were stabilized by inserting a rod into the tibia. Additional injuries to the bones of the foot and ankle were stabilized with a combination of screws and pins. Trauma to the muscle and soft tissue of the leg required surgical release of the covering of the muscles to relieve pressure due to swelling.”

Later in the week, Woods was transferred to Cedars-Sinai Medical Center, which has a renowned orthopedic department, ranked number three in the nation by U.S. News & World Report. 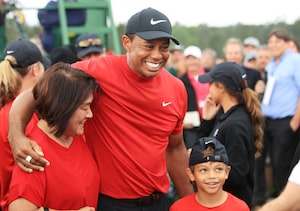 On Woods’ Twitter, his rep added, “Tiger has moved to Cedars-Sinai Medical Center and received follow-up procedures on his injuries this morning. The procedures were successful, and he is now recovering and in good spirits. Tiger and his family want to thank you all for the wonderful support and messages they have received over the past few days.”

Tiger broke his silence Feb. 28 after golfers wore his signature red shirt and black pants during the final round of the WGC-Workday Championship in Bradenton, Florida.

Expressing his appreciation for all the love and support, he tweeted, “It is hard to explain how touching today was when I turned on the tv and saw all the red shirts. To every golfer and every fan, you are truly helping me get through this tough time.” 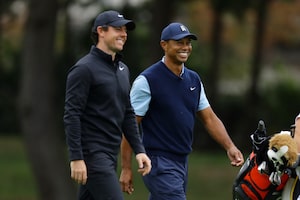