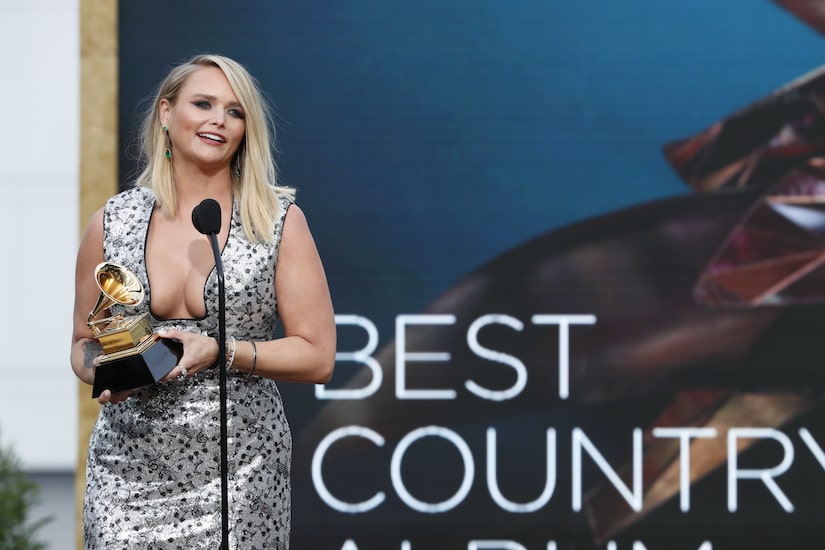 After Miranda’s big win, “Extra’s” Rachel Lindsay spoke with the star, who looked gorgeous in a sleek silver gown.

Miranda shared, “I’m wearing Genny and it has music notes on it. I thought it was appropriate, and I got to bring the girls out. It’s been a while — we’ve been in quarantine.”

As for how she plans to celebrate, Miranda dished, “It’s low-key out here — my manager, my husband, and my tour manager and I are gonna go probably eat something bad for us to eat and have a couple cocktails.”

During her acceptance speech, Lambert gave a shout-out to the other women in the category, saying, “All of us in country… I just recently met Ingrid [Andress], but everybody else, I’ve known for a long time, made music with, toured with, cut their songs. To me, any of us that would have won, this is for us and it’s for the girls in Nashville.”

She went on, “We really worked hard to have a whole category of albums of the year that involve women.”

Due to COVID-19, Lambert  hasn’t been able to interact with fans the way she would like! She explained, “Since ‘Bluebird’ was out, I haven’t got to talk to people. I just relied on social media and people I run into. I’m very thankful that I had a song like this and a record during a time the time that this record came out and ‘Bluebird’ got its wings, so to speak. It was a song of hope, and I never imagined we would need it as much as we did. It was really good timing. That song helped me through. I’m so glad it was able to do that for other people.”

Miranda is getting ready to release “The Marfa Tapes” in May. She commented, “I have two pals… We’ve been going out to Marfa, which is a desert town in West Texas… We wrote about 15 songs… I thought, ‘Why don’t we just put these songs out… I thought people would want to hear them, hear them in the raw… It’s a little scary — there’s nowhere to hide.”