Broadcast legend Larry King died January 23 following a battle with COVID-19, but his death certificate is revealing what actually killed him.

People magazine reports that King, who had contracted COVID-19 in December and who was hospitalized at Cedars-Sinai Medical Center in L.A for it, succumbed to sepsis, which occurs when the body's reaction to infection damages its own organs.

Along with sepsis, King was felled by acute hypoxic respiratory failure (a lack of oxygenation of the blood) and kidney failure. 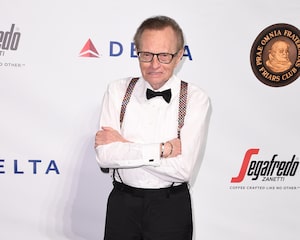 After it was revealed last week that King had cut his seventh wife Shawn King out of his will, she gave “Extra’s” Billy Bush her first words on the story.

Shawn told Billy exclusively, “We are grieving as a family. My boys just lost their father — they are my priority.” She went on to say, “I will comment further when appropriate.”

King’s most recent will is a handwritten note from October 17, 2019, that reads, “This is my Last Will & Testament. It should replace all previous writings in the event of my death, any day after the above date I want 100% of my funds to be divided equally among my children Andy, Chaia, Larry Jr., Chance & Cannon.” The note was written and signed just two months after King filed for divorce from Shawn.