Days after his death, Stephanie Seymour and Peter Brant’s son Harry Brant has been laid to rest.

On Thursday, Harry’s older brother Peter Brant Jr. revealed, “Today we lay to rest, and honor the life of my brother, a true angel of light, an extraordinarily unique soul unlike any who have come before.”

“It is impossible to express the devastation I feel for the loss of one with whom I shared not only a lifetime of beautiful memories, but with one who cared so deeply for my own happiness, was so devoted to my personal comfort, It is the loss not only of a brother, but of a best friend, my other half,” Peter continued. “My heart shatters to think we will never see that dear sweet face again. @harry_brant.”

Years ago, Harry and Peter worked on a makeup collection with MAC Cosmetics. 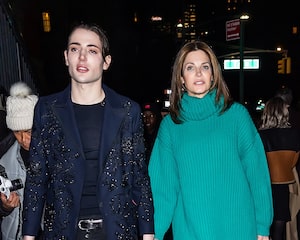 According to his family, Harry’s death at 24 was caused by an accidental overdose. In a statement to The New York Times, his dad said, “We will forever be saddened that his life was cut short by this devastating disease. He achieved a lot in his 24 years, but we will never get the chance to see how much more Harry could have done."

Along with describing him as a “a wonderful brother, loving grandson, favorite uncle and a caring friend,” his family stressed, “Harry was not just our son. He was a creative, loving and powerful soul that brought light into so many people's hearts. He was truly a beautiful person inside and out."